Walking through the desert, tired and fed-up, David Xiao hiked through the scorching Californian sun without water for 32.2 km, which meant his pack was full of water. Is the Pacific Crest Trail worth all this suffering? The past 64.4 km lacked a single natural water source. Even with the help of local trail angels, who left the occasional water cache en route, he ran out of water for the last few miles.

The highs of the trail, however, were enough to keep him going through the lows. “The highs are so good that you want to push yourself past the lows so that you can experience those highs again. Quitting the trail means you would lose the opportunity to experience more highs. It would not be worth it”, David informs me. The PCT is an adventure. A chance to experience a new lifestyle and to experience a freedom you can never quite explain.

Growing up as a child in China, in a city of concrete and steel, David’s friends introduced him to the outdoors when he moved to Canada. Through friends, David eventually began hiking every weekend and decided he needed to undertake a bigger challenge. Chasing adventure, David chose to hike the PCT 4,269.6 km from Mexico to Canada. 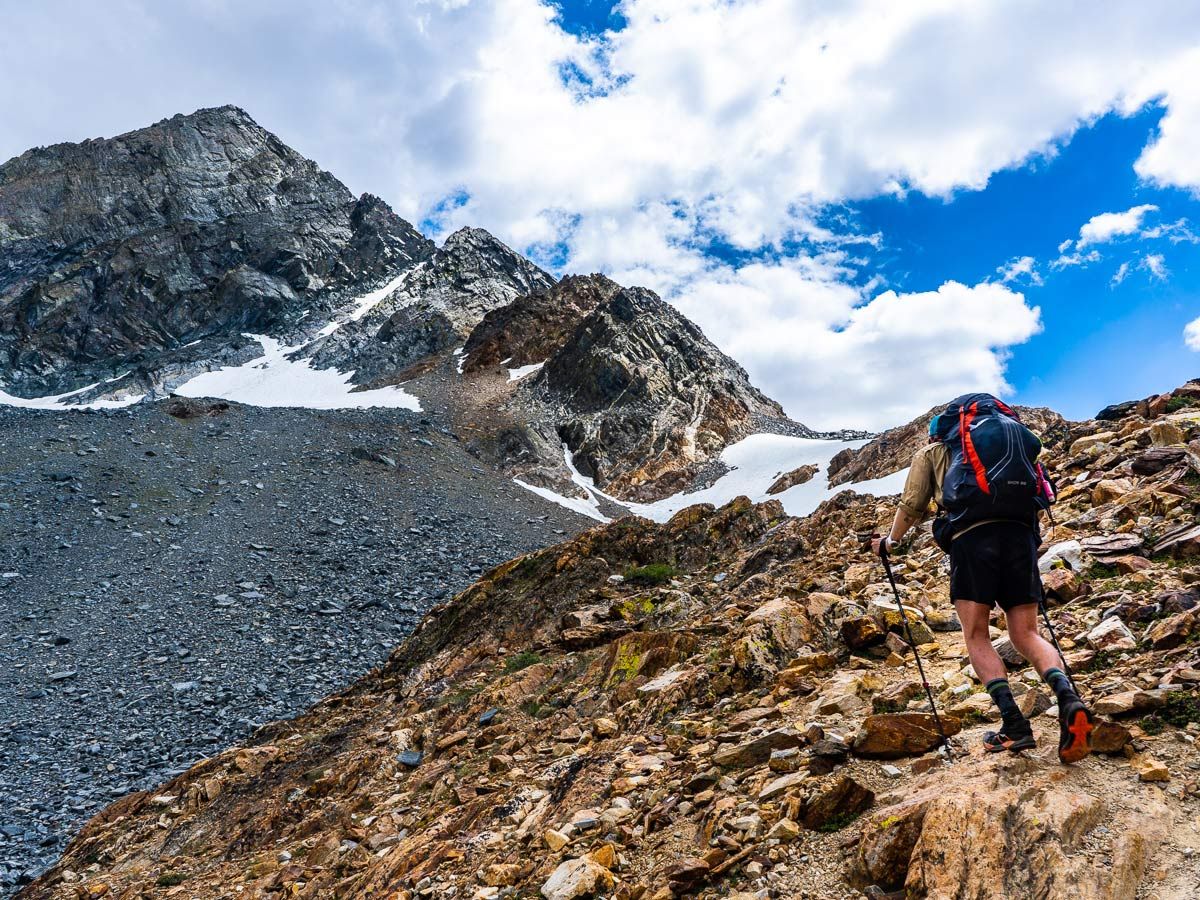 Hiking up a steep trail in Sierras Hiking on Pacific Coast Trail with a mountain in the background

“Sometimes, people question why I did it. Why spend six months of my life walking?” David states. “To be honest, to most people I mutter something generic: It’s a scenic part of the world. I wanted to challenge my body. I wanted to challenge my mind. Deep down, however, the answer is that I truly long for the freedom of the trail. The refreshing moment when you wake up in the morning and do not know what the day will bring. To walk and not have to worry about going to work the next day. A lifestyle of freedom motivated me to continue.”

If you have ever read about the PCT, you will often come across people with tales of how friends and family mailed them food and gear packages at every stop. This, David assures me, is not necessary. At first, he thought he would have to pursue this path too but soon found towns en route offered sufficient food options. In choosing this method, he did not have to worry about packages in the mail and it provided an even greater sense of freedom.

Discussing gear further, David tells me that his biggest aim was to go as ultralight as possible. He desperately wanted to carry his camera gear but also wanted to remain comfortable – this required sacrifice in other places. For example, David chose to break away from the need to sleep in a tent, he first opted for a pyramid tarp but soon realised it was overkill as well and worked on both pitching and sleeping in a flat tarp to save weight. His final pack weighed 12 pounds (including camera gear and a tripod). You can view his gear list here.

David also shared the resources he used to prepare for his hike. Top of his recommended reading list, David encourages all PCT hikers to read ‘The Pacific Crest Trail: A Hike’s Companion’. Although it focuses less on planning, it shows you what the trail brings. It is filled with interesting facts about history, geology, flora, fauna, and animals. David found it hugely motivating as it encouraged you to get out there and do it. For the planning side of the PCT, he used various blogs of past hikers and utilised Facebook groups titled: ‘The PCT Class of XXXX’, checking on posts from past years PCT thru-hikers. 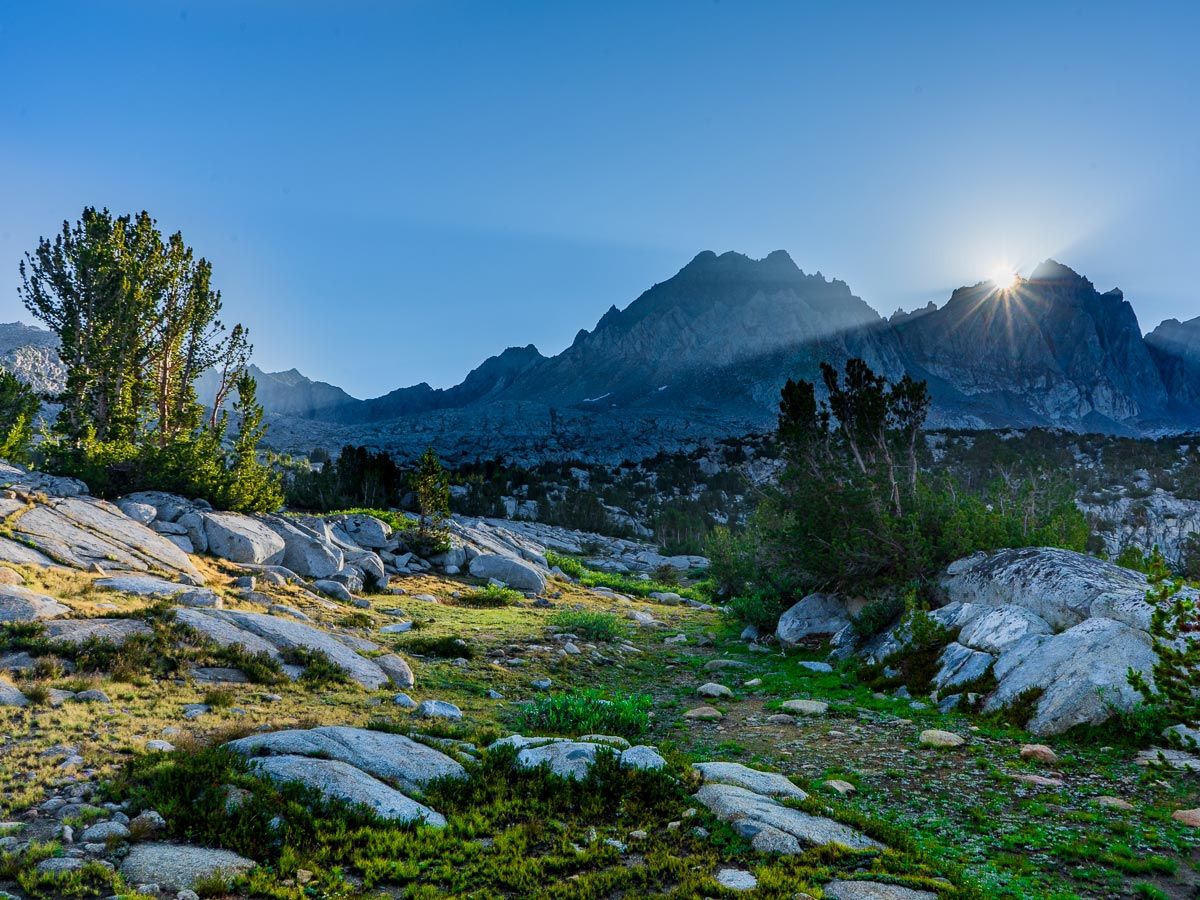 On a typical day, David woke at 5am and enjoyed walking in the dark, watching the sunrise as it broke just over the horizon. The damp cold of darkness then faded and gave way to the beauty of the daylight sky. For breakfast, rather than slaving over a stove, David opted for a quick snack on different bars and continued to walk until he grew tired, took a break, snacked, and headed off once more until he settled down for the evening. At the start of the PCT, he walked far slower than in the middle once he became more experienced. However, nearing the end of the trail, he slowed down once more and enjoyed hot breakfasts, coffees, and long lunches; he did not want the trail to end any quicker than it had to.

Along the route, David hiked with several different groups, known colloquially as one’s ‘trail family’. Each person is also given a trail name. One particular group that he remembers fondly consisted of two others: Carmen, a friendly and adventurous Canadian that had travelled to over 75 countries, and Lost, a war veteran with an incredible sense of humour. Together, they hitched a lift to Northern California and hiked south through the Sierras to beat the snow before returning north again. Together, they hiked over 1,126.5 km. Despite some inevitable struggles and conflict, they swapped stories and have become friends for life.

When asked if it was difficult to leave hikers behind, David confirmed the struggle: “Unfortunately, that is the nature of doing such a trip.” Today, however, social media has made it easier to keep track of where they might be. David fondly informs me that “it is so exciting when you are able to meet once again after a long absence. For example, on day two of my hike, I met a guy named Happy. We hiked together for a week and didn’t see one another again for most of the journey. However, we were accidentally reunited on the very final stretch to the Canadian border. Funny how that happened!” 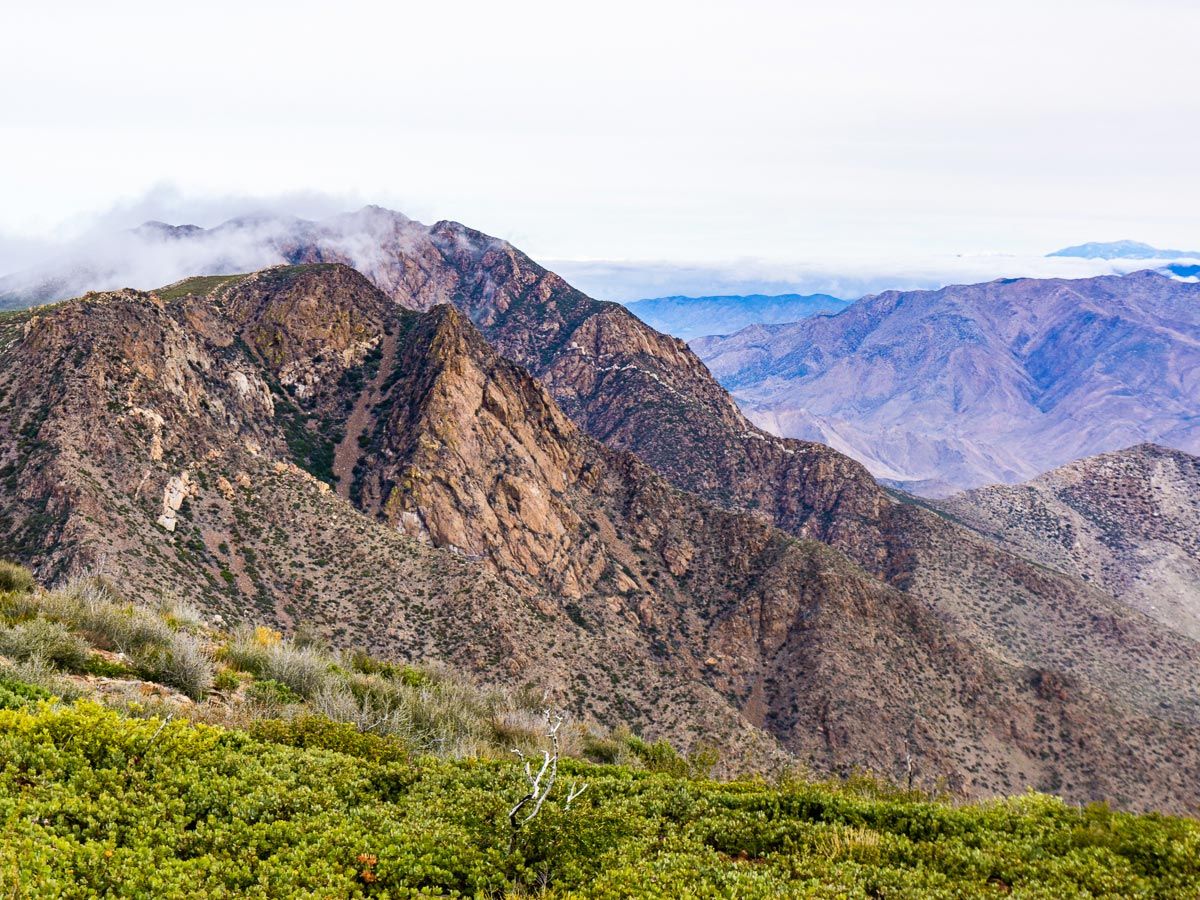 Reaching the finishing point, the US border, just on the edge of Manning Park in British Columbia, Canada, David’s feelings confused him: “I actually felt an overwhelming sadness. I tried to feel happy, to celebrate, to rejoice, but there was something holding me down. The finishing point marked the end of the greatest adventure of my life. The next day, I knew I had to leave this life behind and go back to civilisation.” “The end”, David elegantly remarks, “is not an accomplishment to be celebrated. The end of the PCT is like a rude awakening to a beautiful dream. The dream was over, and I? I was not ready to wake up.”

1. What's the best memory from your thru-hike?

Honestly, this is an impossible question to answer. There are so many memories I will never forget, and they mean so much to me, but they are impossible to explain. Most of these memories are valuable because they play into the grand experience of the trail. Isolating a single memory is never the same. It is the whole experience of the PCT, and everything it represents, that stands out most in my mind.

2. What do you wish you had known before you set off? Share your wisdom with our readers!

Foam mattresses are nowhere near as comfortable as they look! Frankly, it was cold and uncomfortable. A week in, I switched to a Thermarest air mattress. I also started the trail with a pyramid tent but decided it was such a pain to set up that I didn’t bother doing it. After some experimenting with a flat tarp (my groundsheet at the time), I decided to swap to an even lighter shelter. Oh, and bring toilet paper! Don’t try to use a bidet bottle to save having to carry toilet paper, it’s a terrible idea… according to my ‘friend’ anyway! ;) 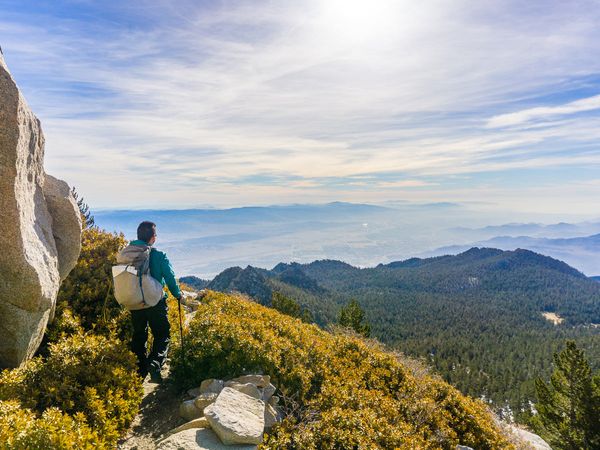 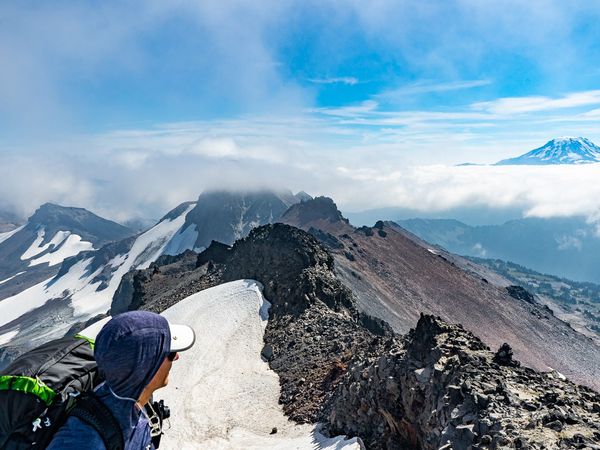 Hiking to the Mount Adams peak

3. Can you tell us more about your most important gear?

4. What's your Day job? And what do you do for fun when you’re not hiking?

I work as an Actuarial Analyst for a general insurance company, a job not a lot of people know about. Basically, I use statistics to calculate insurance premiums and do other analytics to help the company grow while being profitable. It’s really the exact opposite of the outdoors but I love my job because it’s interesting and it allows me the work life balance to explore the outdoors. 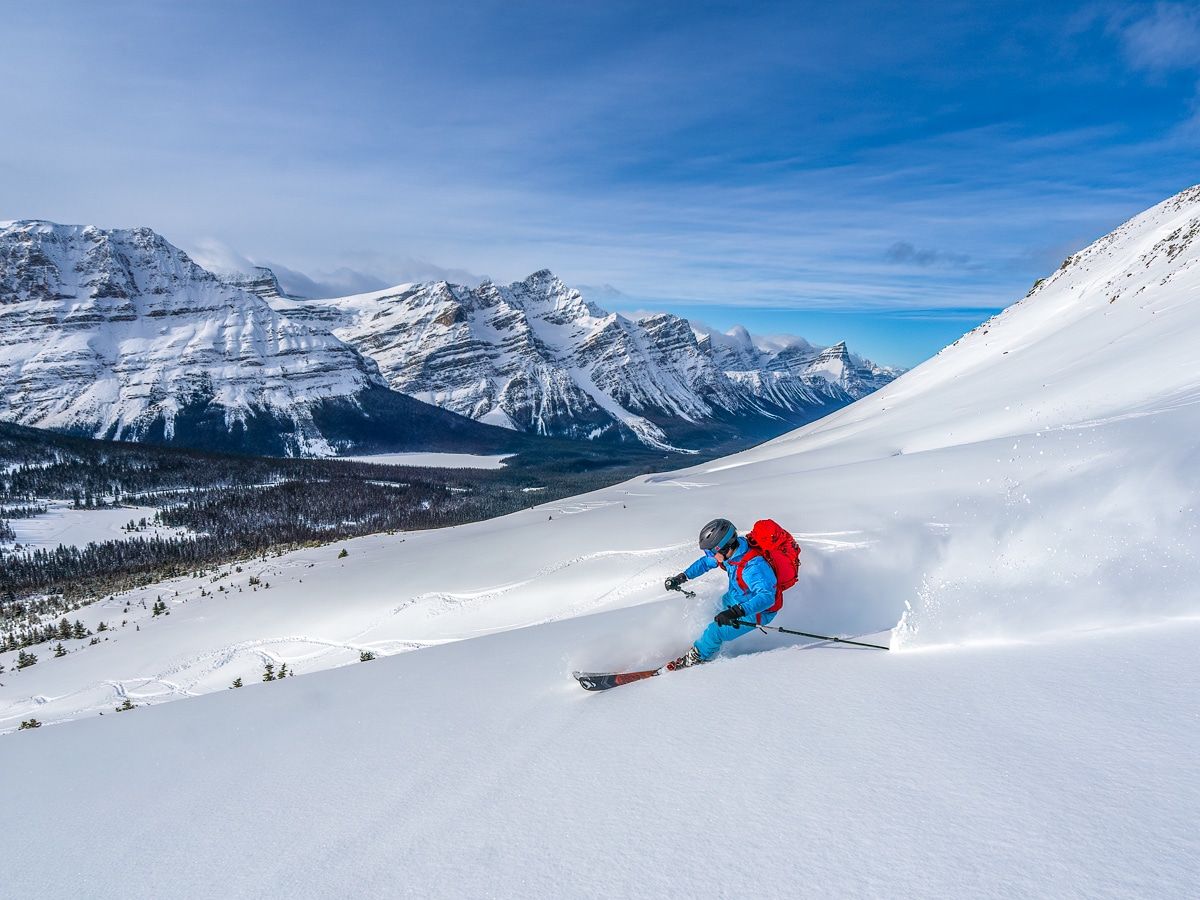 Man skiing on a trail in the Canadian Rockies 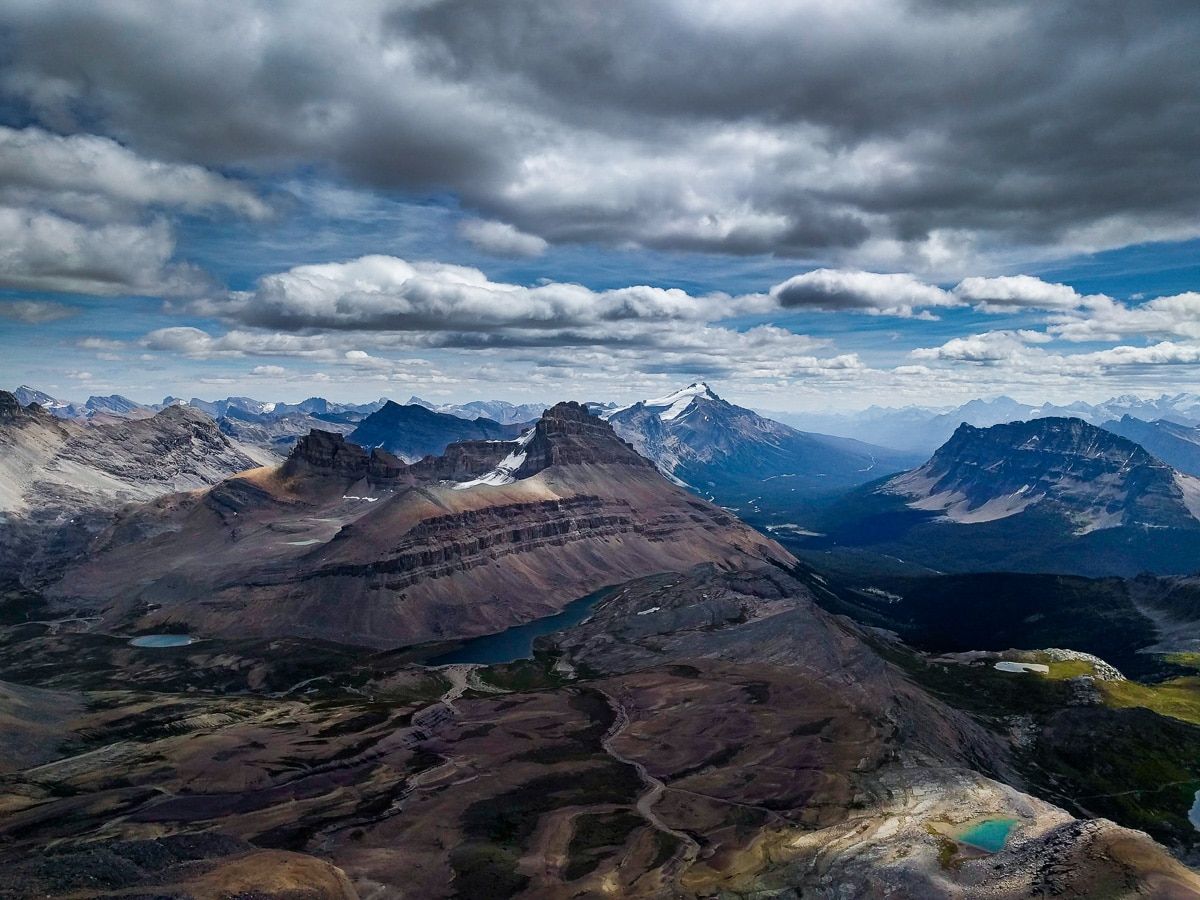 5. Where do you hike normally?

I hike pretty much every weekend in my local playground, the Canadian Rockies. My favourite area is the Icefield Parkway between Banff and Jasper. The mountains there are just fantastic. Tall, jugged and surrounded by lakes and glaciers of all shapes and sizes. There are so many different routes that takes you out of the trees in no time at all and rewards you with jaw dropping vistas in all directions.

I am going back to my old job for now. Honestly, it is a really hard adjustment – post-trail depression is definitely a thing! I am going to work on saving money and figure out how to best live my life – find a way to balance work with doing what I love. I definitely want to go skiing more now winter is rolling around so I will get my adrenaline hits there for now!