Planning your trek on the Pacific Crest Trail

The Pacific Crest Trail is a 2,650.0 mi route that stretches from the Mexican border to the Canadian border. This renowned scenic trail is known as the Everest of long distance hikes, but interestingly enough, more people have summited the famous mountain then complete the entire Pacific Crest Trail. The PCT passes through 315,000 ft of elevation and 315,000 ft of elevation loss. This is the same elevation as climbing Mount Everest more than 10 times! Of course, you are doing this over 6 months rather than one glorious push to the top. This iconic trail temps thousands of people each year to complete even a section of the hike. Last year was the busiest year for PCT finishers with 600 people completing the iconic thru-hike. 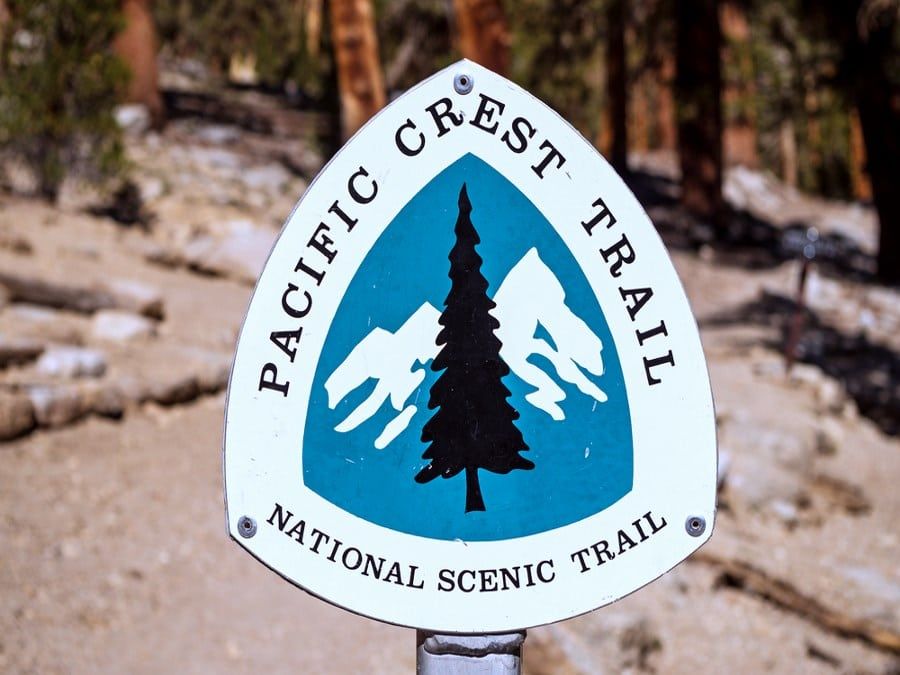 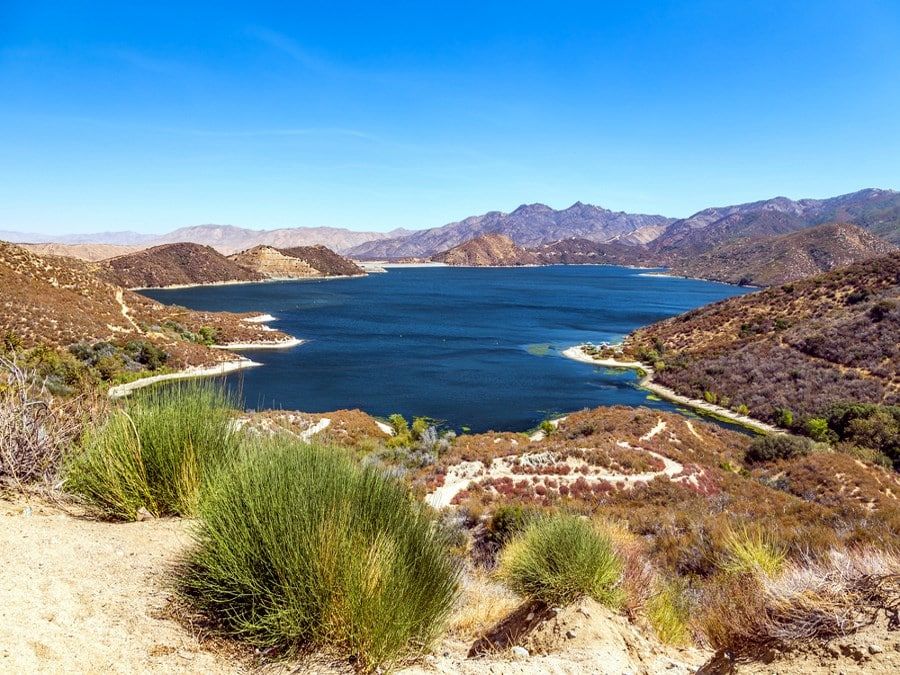 Closest Major City: San Diego in the south & Bellingham in the North
Start: Campo, California & E.C. Manning Provincial Park, British Columbia
Accommodations: Camping, Hostel, Motel, Hotel, and Backcountry Lodges
Costs: $1,000 a month once on the trail
Length: 2,650.0 mi (give or take a few miles)
When to Go: Start mid-April to early May at the latest 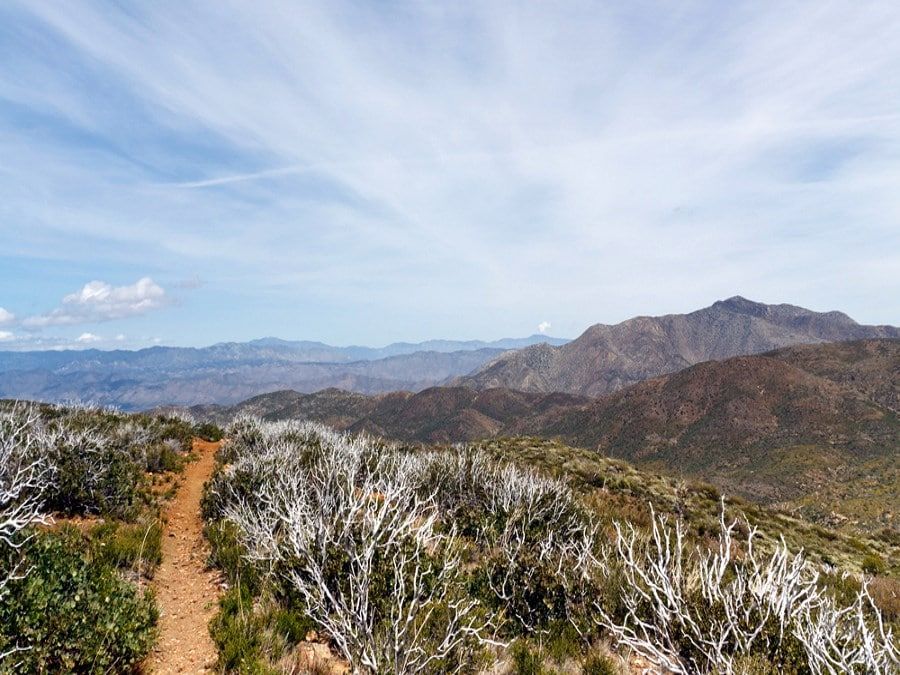 Sunset Near Tehachapi on a Pacific Crest Trail

Roughly 90% of all hikers start the PCT at the southern terminus at Campo near the Mexican border. The first step is finding a flight, bus, train, or car ride to southern California. San Diego is 45.0 mi west of Campo and has an international airport where you can find reasonably priced flights. This is a major city and you will be able to find all your last-minute necessities at one of the many outdoor recreation stores. When you are ready to hit the trail, you will make your way to the El Cajon Transit Center about 10.0 mi east of downtown San Diego. From the transit center, you catch the #894 bus to Campo, which runs 3 times a day and only costs 5 dollars to ride. 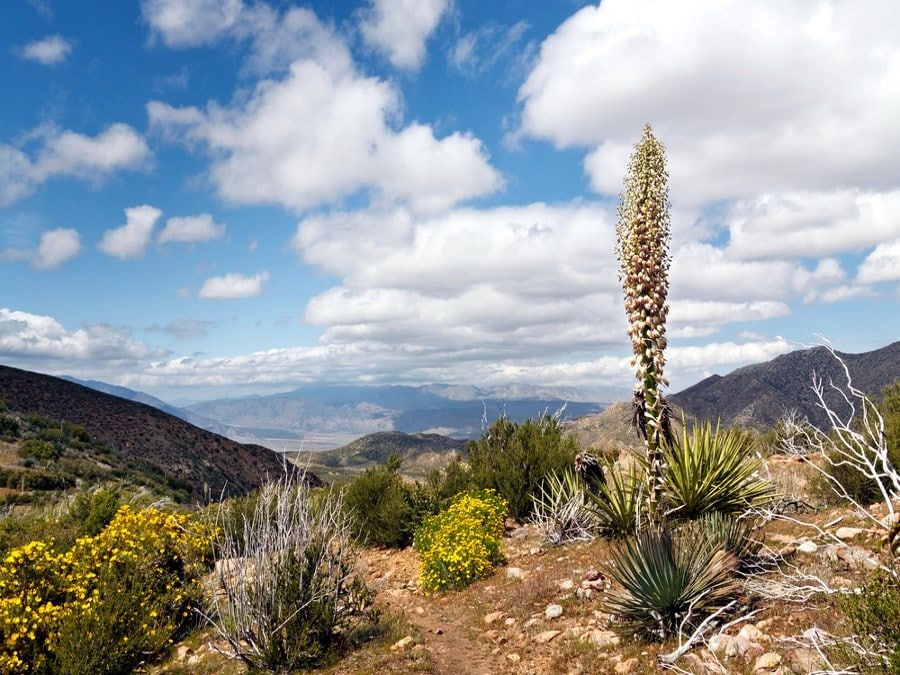 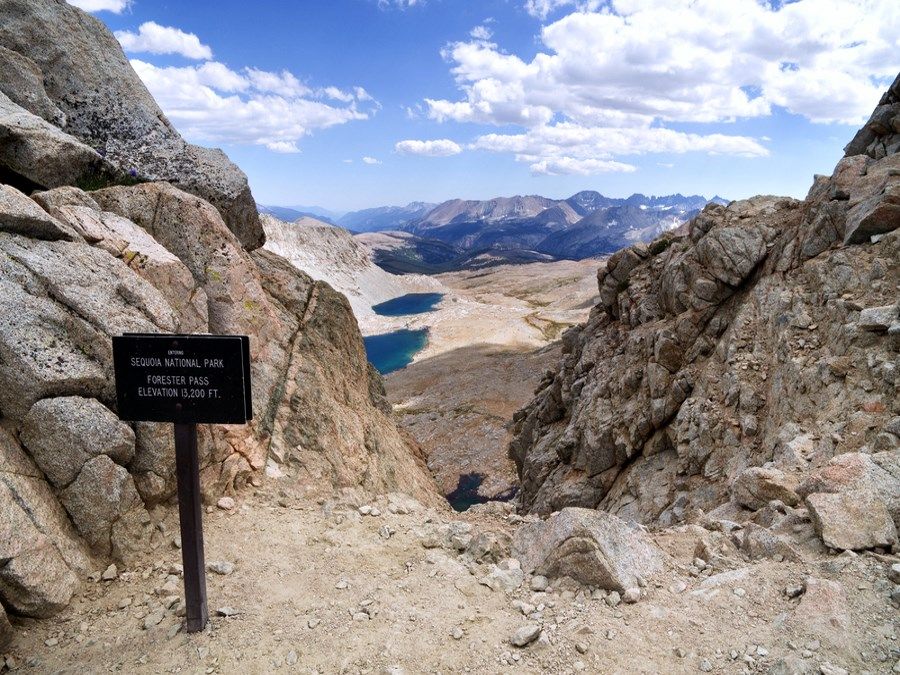 This illustrious trail begins with 700.0 mi of desert that will break the spirit of most hikers. Water is scarce at many locations along the trail, but southern California is by far the most difficult place to find water due to the extreme drought that has plagued the southern half of the state for many years. While the draught is abating, many desert locations still have water scarcity and there may be times where you must hike as far as 30.0 mi to find your next water source, so this section should not be attempted unless you are physically fit to endure the desert climate.

As you reach central California you will find solace in knowing the desert is behind you, and there is nothing but beautiful wilderness ahead. You will enter the shaded canopy of the Sierra National Forest, which will lead you to the Ansel Adams Wilderness and then on to Yosemite National Park. In this section, you will traverse the John Muir Trail, which is widely regarded as the most beautiful 200.0 mi section of the entire Pacific Crest Trail. 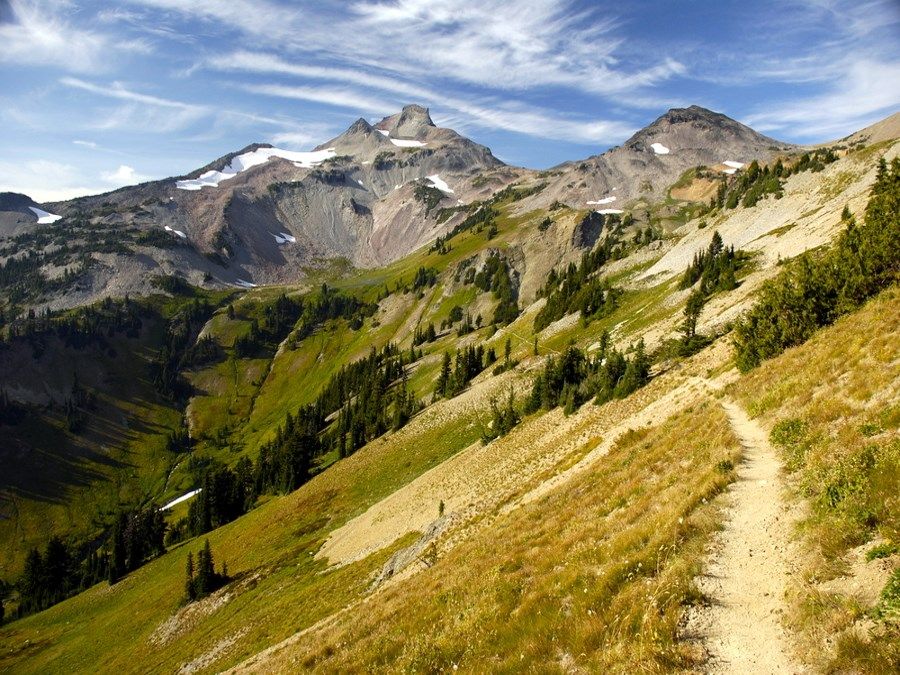 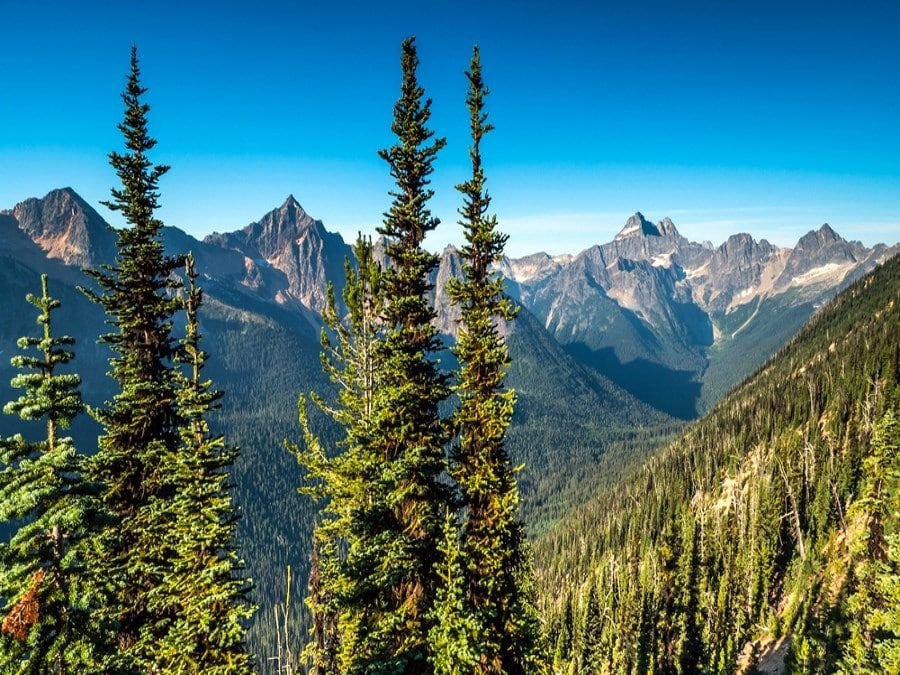 After you leave Yosemite you will enter the Stanislaus National Forest where you will hike roughly 200.0 mi through the 1,400-square mile park. This forest has nearly 2,900.0 mi of trails that are perfect for side excursions. You will pass through two more national forests before reaching Old Station, where you will head west past Mt. Shasta to the Six Rivers National Forest. Here, you will head north for your final leg of the California section.

After what feels like a century, you will leave California and enter Oregon state. From here on out you will be hiking in a national park or national forest for over 90% of your adventure. The 460.0 mi Oregon section is relatively short compared to California, and you will only begin to enjoy the beautiful forests of Douglas and noble firs before you find yourself crossing into Washington. The lack of elevation change makes the Oregon section the easiest of the three states. You don’t have to blow out your lungs tramping up a mountain side. Instead, you will walk along beautiful meadows and enjoy the views of the mountaintops surrounding you.

Washington is the final, and most beautiful state of the hike. You enter the heart of the Pacific Northwest and are immediately enveloped in the evergreen greens and the lush forests providing respite from the blazing sun. The western half of Washington receives a consistent downfall of rainwater that allows plants to thrive. One of the largest reasons to start the PCT in April is so you can reach Washington by August, or September before the rain starts to fall. Once the rainy season starts in the Pacific Northwest it doesn’t end until late spring, so plan to start your hike early so you can enjoy the full beauty of Washington state. 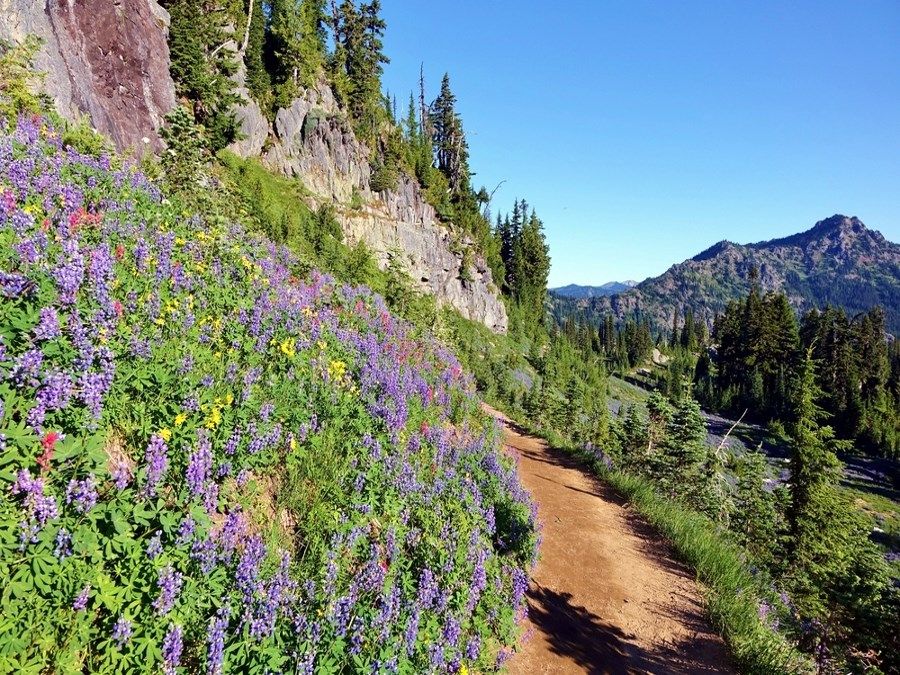 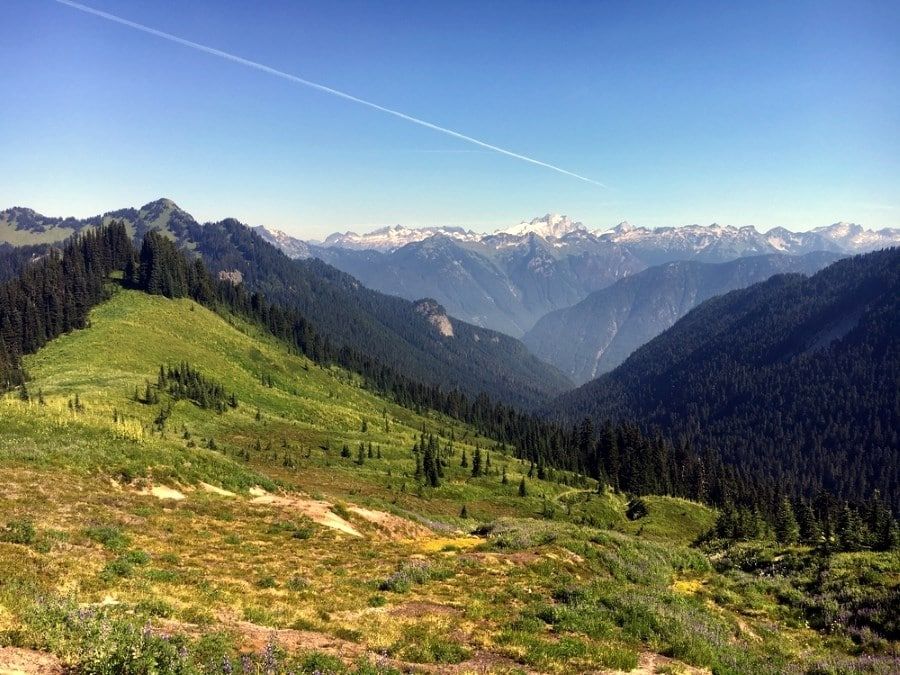 For most of this journey, you will camp where ever you decide to break for the night. The Pacific Crest Trail Association strongly encourages each hiker to consider “leave no trace” camping techniques such as camping at least 200 feet away from water sources and trails. As a hiker, it’s very easy to trudge into an area and haphazardly throw down your pack near the water source and set up camp because you’re tired and it’s a beautiful location. When one person does this, there is little impact, but when several people choose to camp like this the vegetation will die, and the site will lose its natural beauty. Please respect nature and abide by all leave no trace guidelines.

The PCT covers hundreds of miles and you will pass through small towns where you can find hostels, motels, and hotels to freshen up and enjoy modern comfort for a day or two. It’s important for your body to take rest days and it’s a good mental break to enjoy all the food you’ve been craving on the trail. In certain locations along the way you will find backcountry lodging, but these are not always lavish cabins, they may just be a shelter that keeps you out of the elements for a night. Many of the lavish cabins offer free amenities for thru hikers with credentials, but the rooms are expensive and you can pay as much as $24 for a shower and load of laundry. Field of wildflowers on the Pacific Crest Trail in Washington state Mount Rainier as seen from the Pacific Crest Trail