The GR5: An incredible journey through the Alps

“The GR5 was a pivotal point in our marriage”, Richard tells me, “as I learned to ask for help”. “Before this, I was always the strong man, bearing pain and taking charge. This was especially true in the mountains, as my wife was very much a city girl, before she developed a love of the mountains, trekking in Bolivia, Peru and the Canadian Rockies”. Richard shared the day he changed, “One day, I was in a lot of pain and I could barely walk. Lynn volunteered to take a lot of the weight from my pack, allowing me an easier descent. This really changed the power dynamics of our relationship. I felt comfortable accepting help and Lynn stepped up to be superhuman. Hiking the GR5 was not only stunning but really helped develop and strengthen the bond I have with her, it was an invaluable experience.” 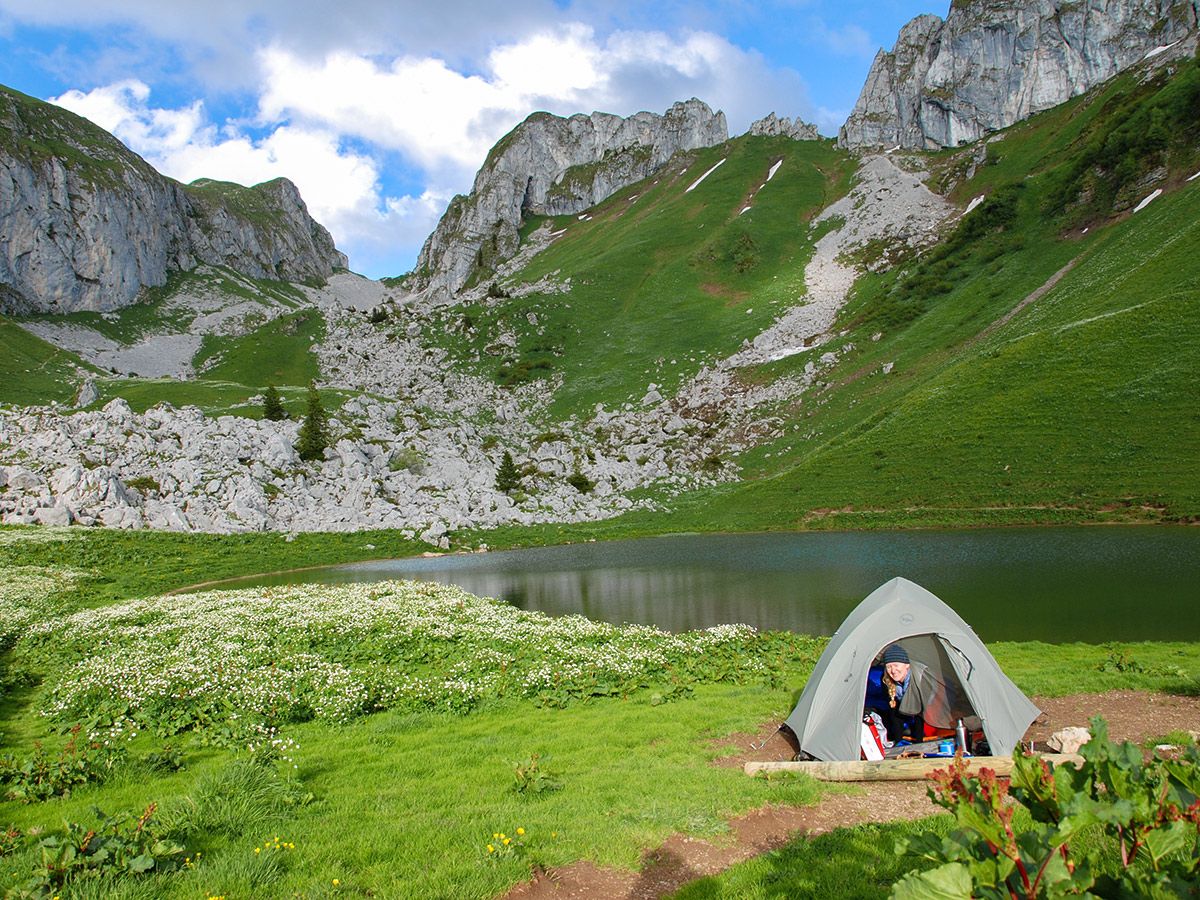 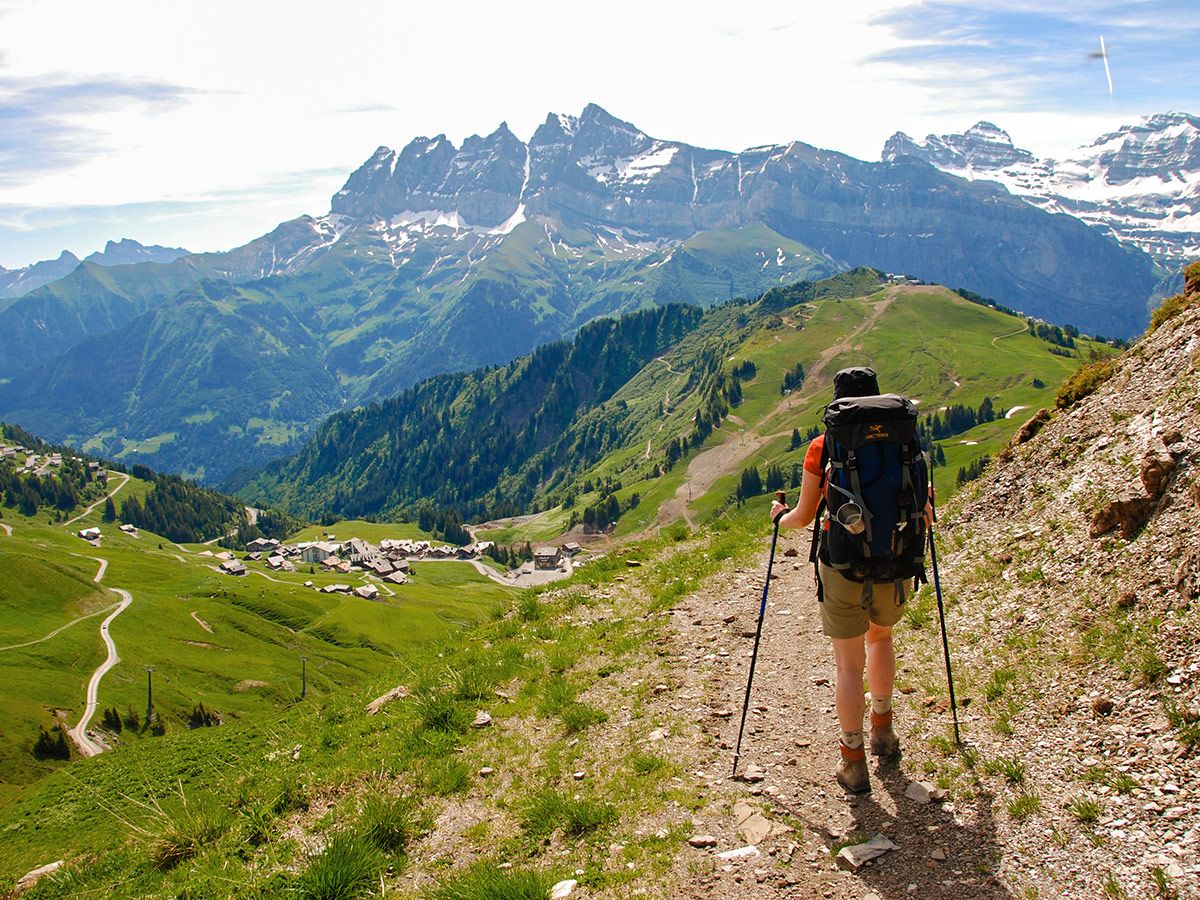 The GR5, Richard refers to, is a 700.0 km mountain path across the French Alps. Starting on Lake Geneva in Thonon-Les-Bains, the trail weaves it way over mountain tops and into valleys below, encountering a string of quaint villages and towns along the way before finishing at the Mediterranean Sea in Nice. Richard, founder of 10adventures.com, and his wife Lynn completed the walk over 28 hiking days in June and July 2009. Initially, the idea was simple: just hike together, enjoy backpacking, and make the most of one another’s company. As they got closer to departing, they decided to do more and set up a fundraising page.

Fundraising for RoomToRead gave meaning to their hike. RoomToRead is a non-profit organisation working to improve literacy and gender equality in education in the developing world. Richard, an avid traveller, spent time in his youth trekking in Nepal and acknowledged the lack of educational facilities in the neighbourhoods he ventured through. After learning about RoomToRead, he decided he wanted to help. Together, Richard and Lynn raised $20,000 for the charity and personally matched donations until they had enough to build and stock three libraries in Nepal. 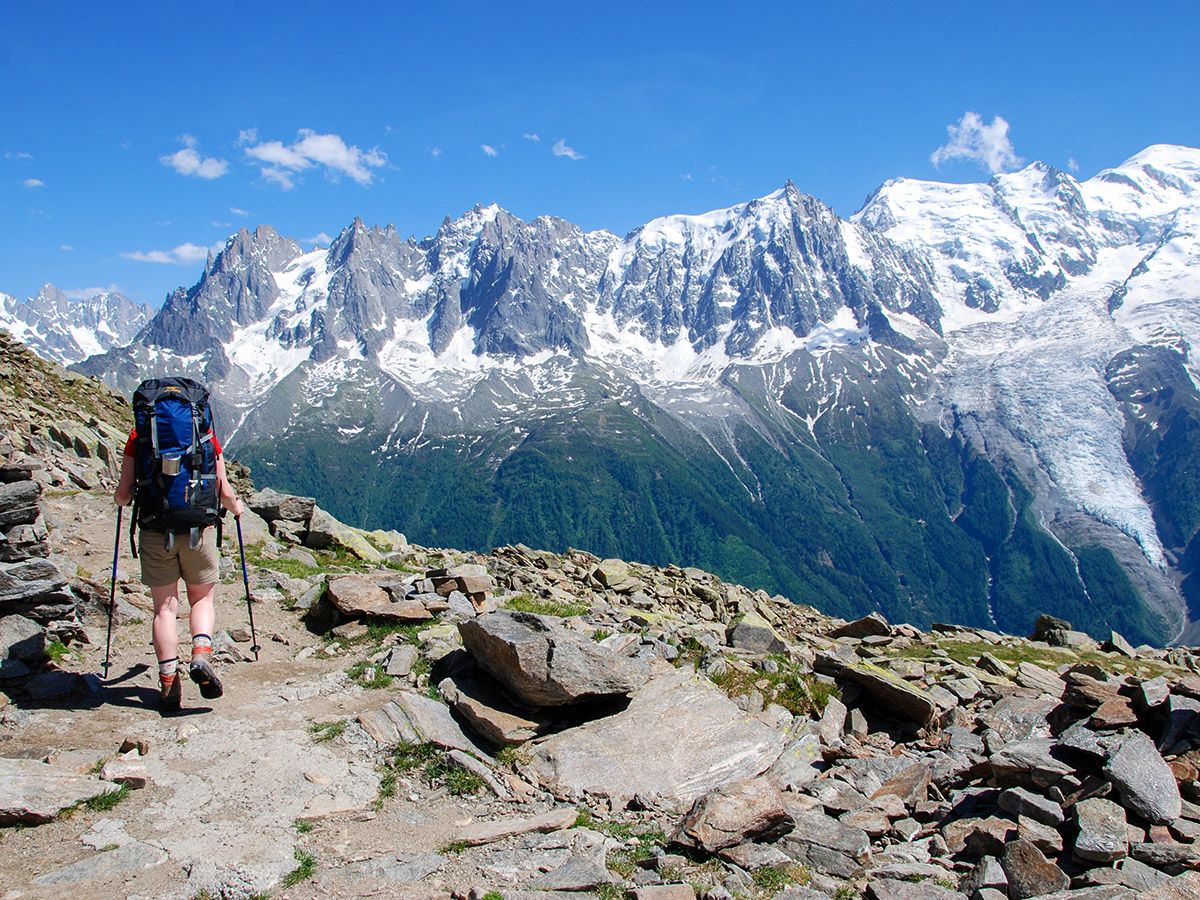 Of course, as with any thru-hike, there were ups and downs but overall, the highs far outweighed the lows. When asked about the biggest challenge he faced, Richard recalled the physical impact of the trail on his body: “I had truly battered my feet. I had new orthodics that it turned out were poorly fit to my feet. At the end of each day I could barely walk, and gritted through each day, as my feet, ankles and knees were screaming in pain”.

Lynn, on the other hand, remembers the mental barriers she encountered. At the start of the trail, she wasn’t sure she would be able to finish the hike: “I didn’t quite know what I was getting myself in for. I had trekked in Bolivia and Peru, but this was more remote. There was nobody on the trail and we hadn’t really done any preparation for the trip. It was a cold winter and we spent a lot of time indoors. I knew it was going to be hard work hiking over half a marathon each day, but the first six days saw me in tears at some point each day. I am strong-willed though. I told myself if I kept pushing the pain aside, I would break ‘the wall’. After my breakthrough, I stopped thinking about my sore feet, I told them to be quiet, and I found much more inner-strength after.” 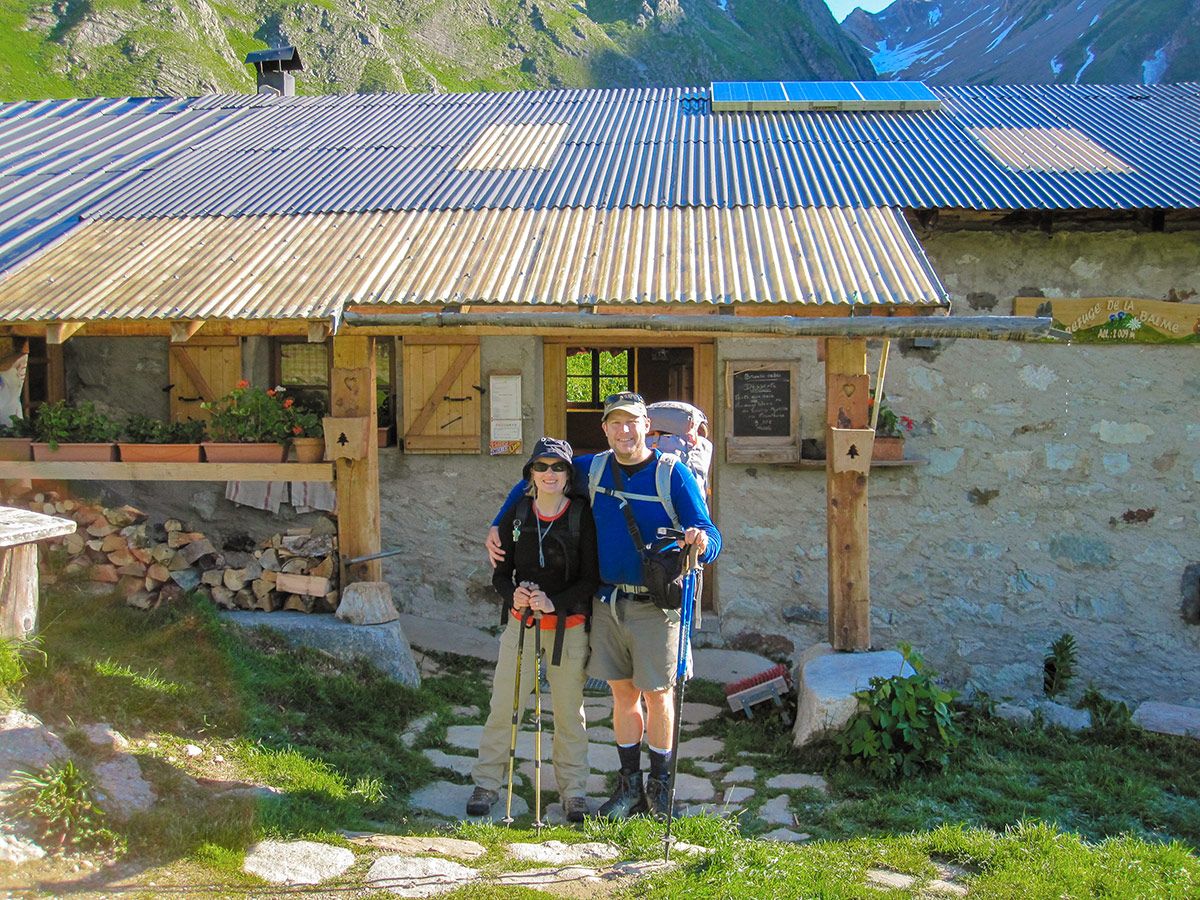 Conversely, talking about how their attitudes changed on the trip, Lynn states that by the end, she no longer wondered why she was doing this or if she could keep up. When Lynn asked Richard how much longer they had to go, the reply of two hours felt began to feel like nothing. Their bodies recovered faster, and they grew stronger with every day and found the trail bought them joy and a sense of serenity and comfort they never realised existed.

Both agree that the trip gave them a new view on life, a renewed sense of what is important and a reminder of how much joy little things can bring. After a hard few days hiking, nothing felt more rewarding than a warm shower, fresh vegetables, or even taking a break for some water.

Generally, the trip went without a hitch. The stunning scenery kept them going and any problems were soon rectified. One of the scariest moments, Richard recalls, was an encounter with an enormous mountain dog, known locally as a Pastou. Walking near a flock of sheep, the 150-pound dog bound over the fence and began aggressively barking and chasing them. Rather than showing anger, you are not supposed to react to these dogs, and so Richard and Lynn walked slowly as the dog snarled right behind their legs, close enough to feel the hair of their legs stand up to attention and have both of their hearts seemingly beating out of their chests. Fortunately, the dog soon got bored and ran away but it left a mark on their minds and both grew cautious of any encounters with animals from there on out. 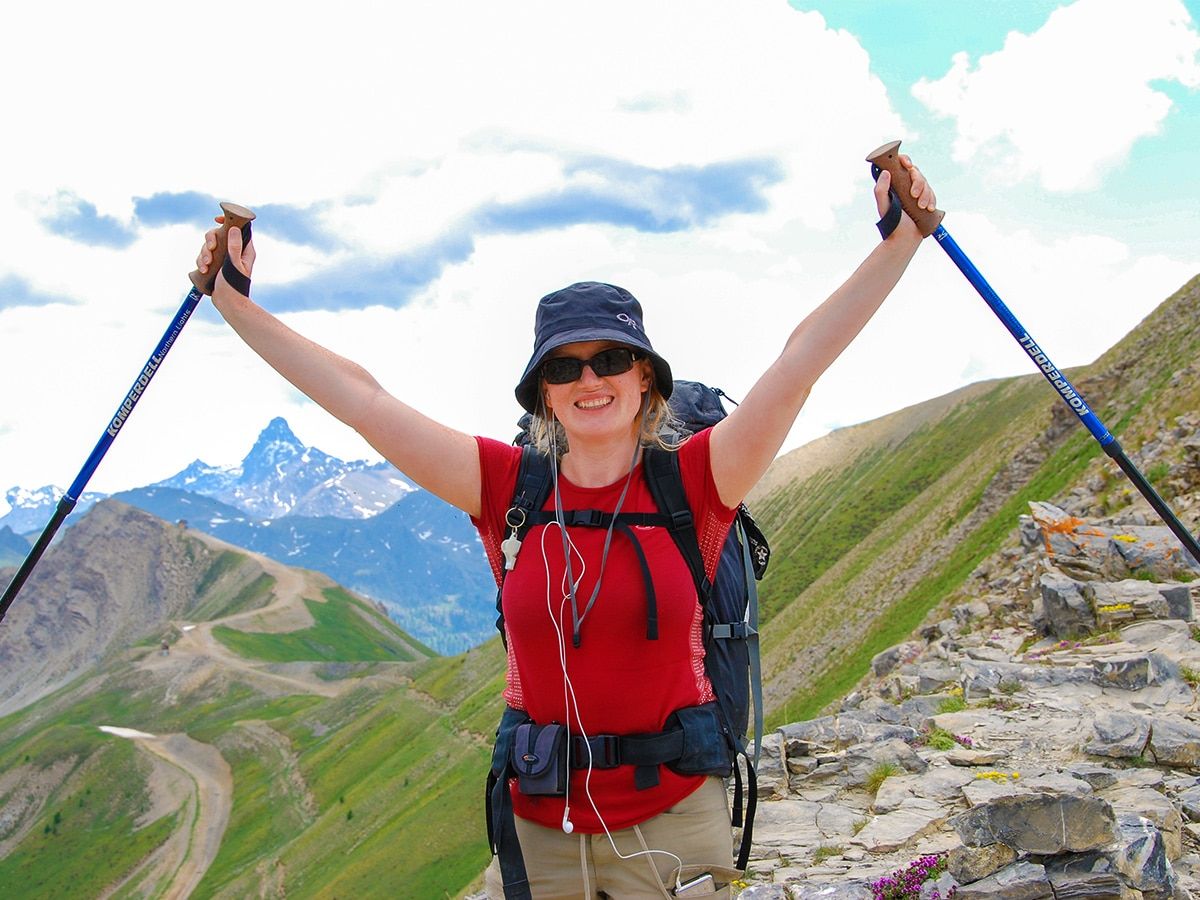 When it comes to practicalities and sleeping arrangements on the GR5, Richard tells me the options largely depend on the time of year you decide to set off. Choosing to go very early in the season meant Richard and Lynn encountered hardly any other people on the trail. It also gave them a greater choice of accommodation on offer. While bringing tents and sleeping equipment for backup, they spent most of their nights in alpine refuges.

Refuges are cheap communal lodgings where several people sleep side-by-side. In the peak of summer, refuges may have around 50 to 60 people staying in them. However, Richard and Lynn found they were often the only people there. While this had its advantages, at times it also felt unsettling – in fact, at one point they both experienced very negative vibes from one proprietor, and were happy to move on the next day. Hiker on a rock on GR5 backpacking trip in Alps

On one particularly memorable night, Richard and Lynn stayed in a high-alpine pasture working dairy farm. On the ground floor, cows and sheep lived in docile co-habitation with thru-hikers who stayed in the sleeping quarters directly above. After being served dinner with freshly-turned yoghurt, made from the animals below, it became clear it was not a tourist operation but rather a family-run dairy business seeking to make a bit of extra income from thru-hikers on the side. They both thoroughly enjoyed this unexpected insight into life in rural France.

The finishing point in Nice presented a climatic end to their journey. After having wound through the luscious mountainous landscape of the Alps, reaching the ocean marked a definitive end to their spectacular trip. It was only when they reached civilisation that they realised, in all honesty, they smelt terrible! After throwing away their clothes and purchasing new ones, they realised trail life had drawn to an end. It was a rewarding journey to remember. Although it had been both emotionally and physically testing, they smile at one another and tell me they had the time of their life, they would do it again in a heartbeat if the chance presented itself. 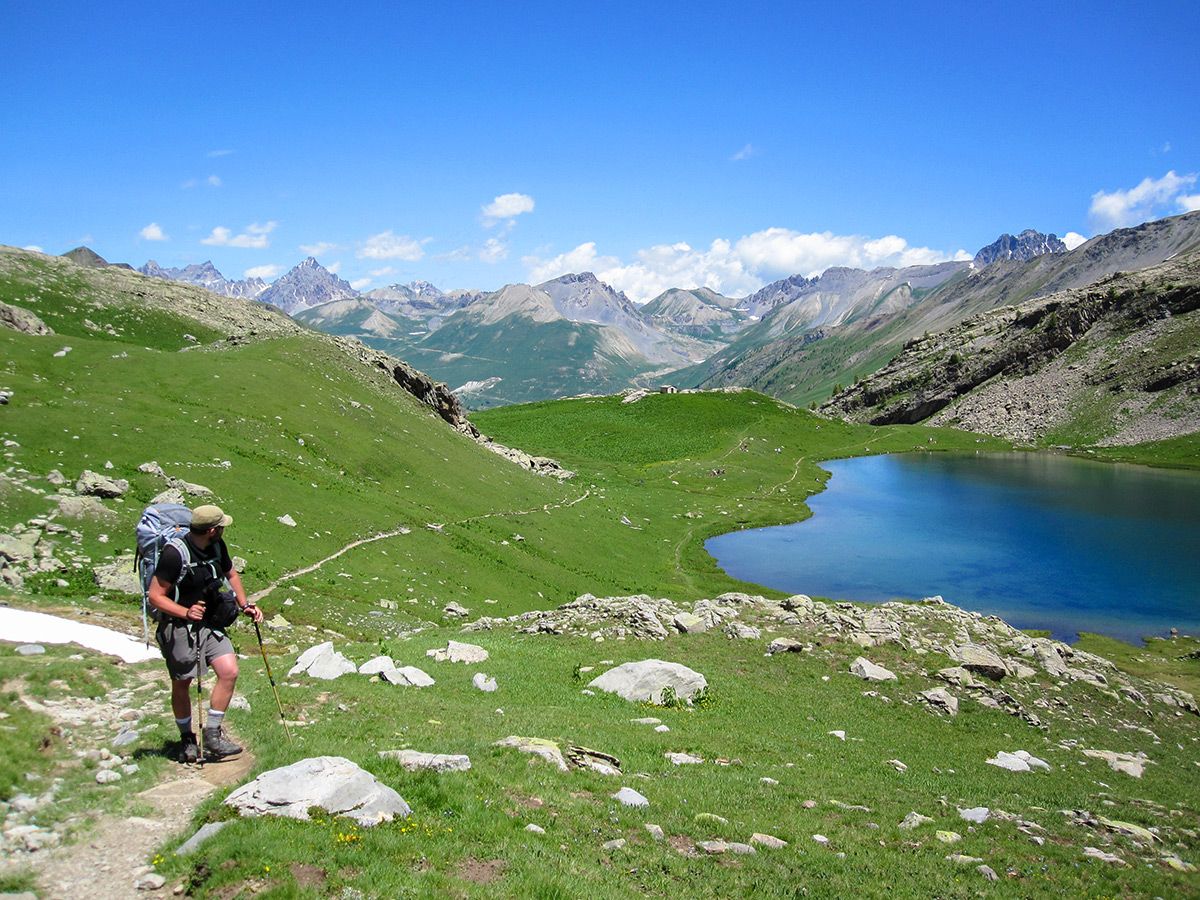 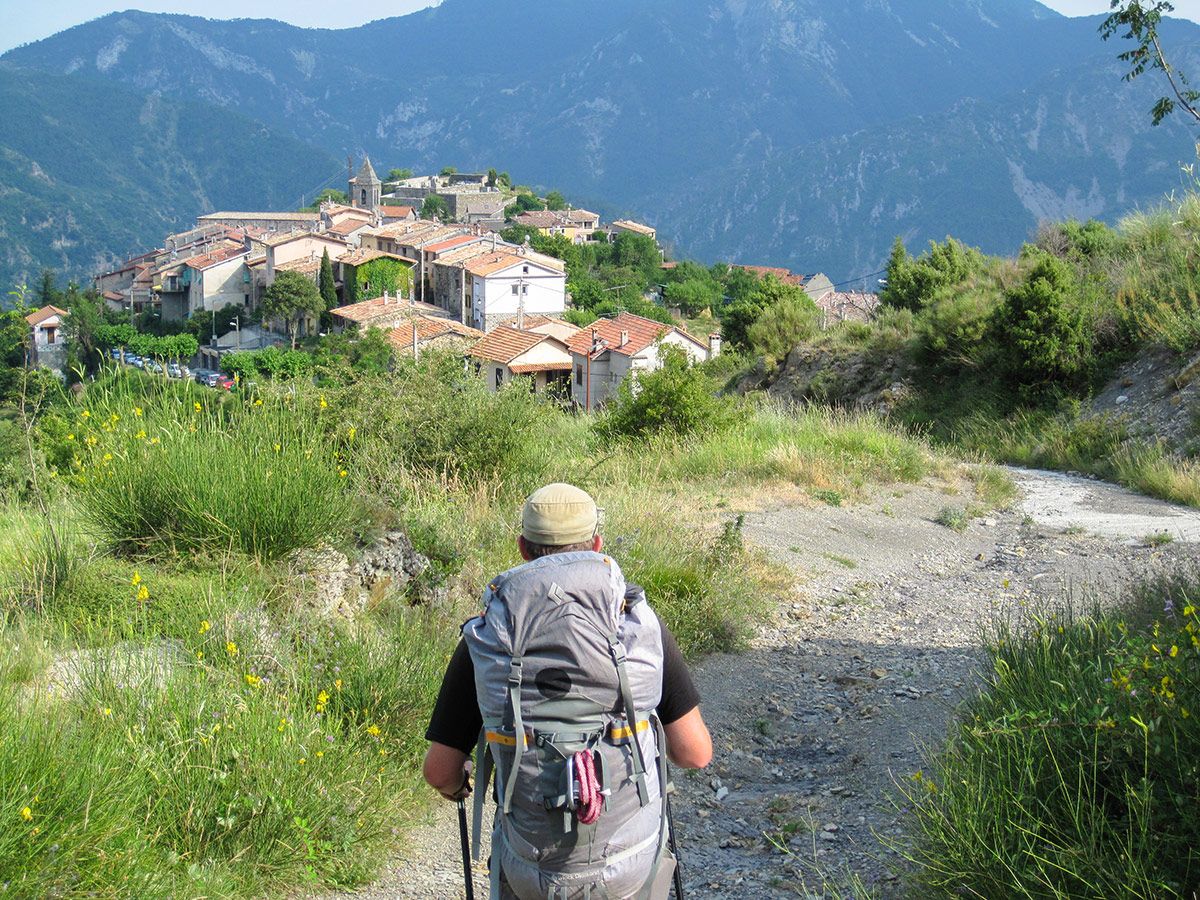 Approaching the mountaintop village on GR5 backpacking trip in Alps

1. What's the most interesting memory from your thru-hike?

On our second night we came into a public campground late in the day. We were exhausted, as we hadn’t really trained at all for this trip. We were surprised as the campground was almost full with trailers, and it looked like the other campers had been there a while.

Nobody came out to talk with us and we had a lot of people looking at us from their open door, in a hostile manner. Eventually a man came over and started to question us. I explained what we were hikers doing the GR5 and I saw him visibly relax. He became welcoming and soon his wife brought over dinner and kids and others came over and played with us.

That night there was loud music until 2 or 3 am and a big party. Not for us, we were asleep by 9pm. I got the impression that was normal.

Later on in our trip we found out that these were Gypsy’s, and that they had occupied that campground and there were a lot of political issues surrounding the fact. 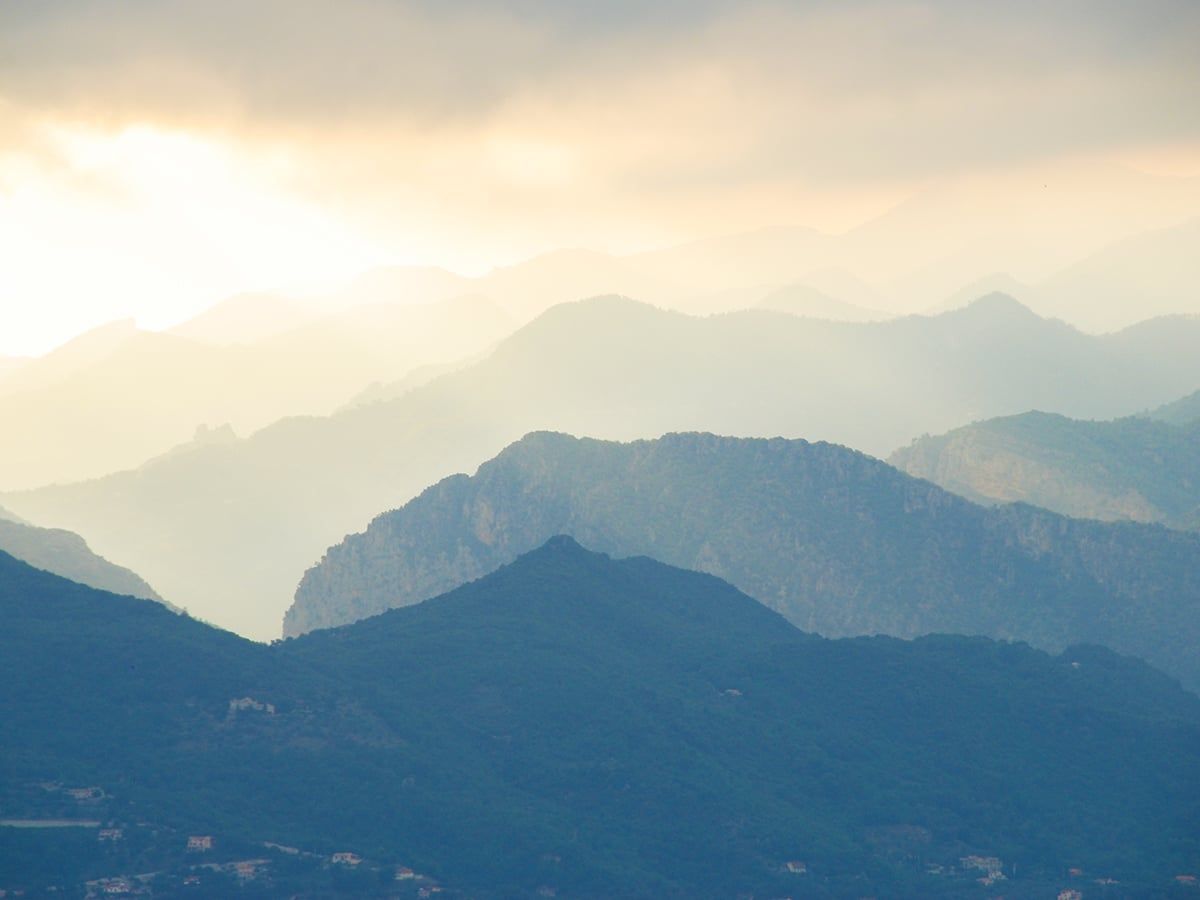 Sunset over peaks on GR5 backpacking trip in Alps 2. What do you wish you had known before you set off? Share your wisdom with our readers!

How great the GR5 was. I would have done it earlier in my life. It is such a special trip.

3. Can you tell us more about your most important gear? Eating watermelon in Nice on GR5 backpacking trip in Alps 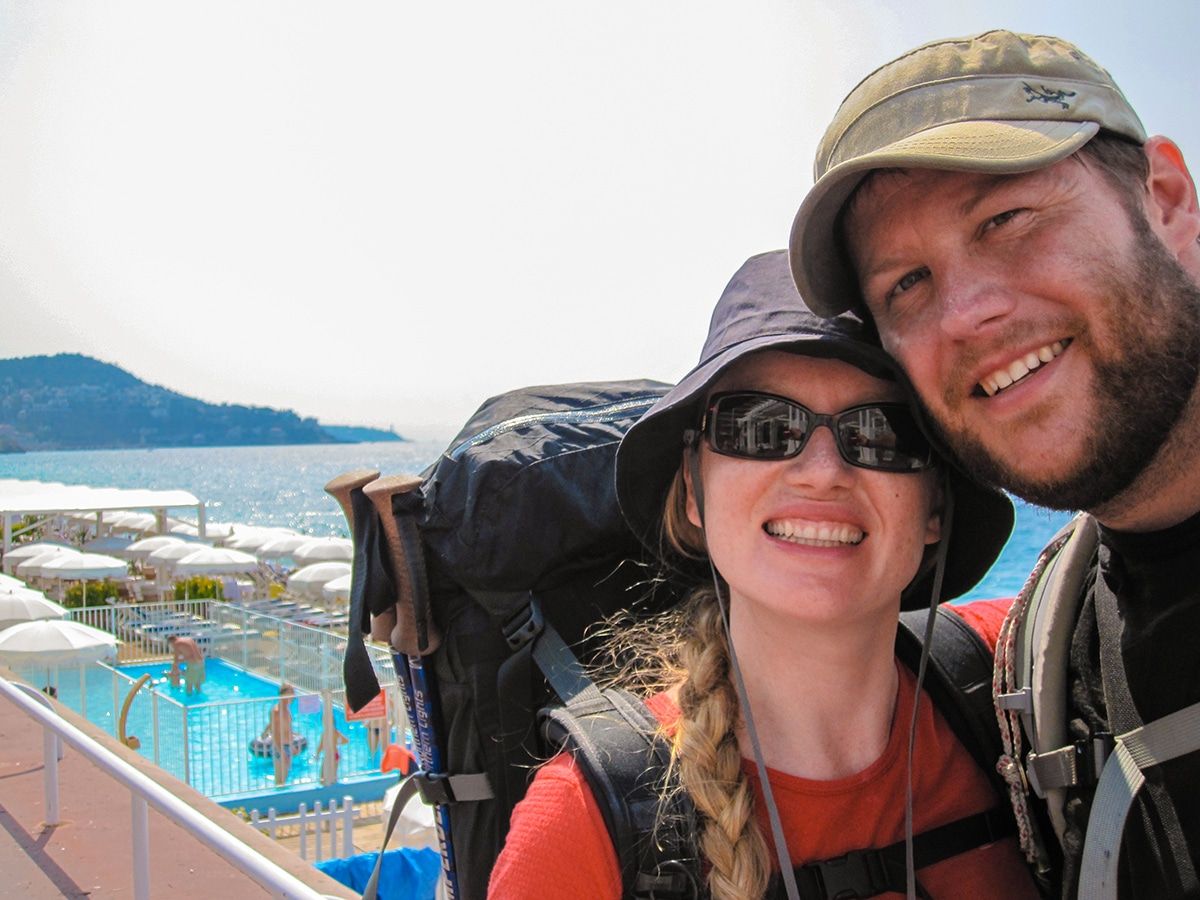 4. What's your Day job? And what do you do for fun when you’re not hiking?

I gave up a corporate career to found 10Adventures. Our goal is to make the outdoors more accessible and help people live incredible, adventurous lives.

When not hiking I like to spend time with my family. Playing board games, building lego and introducing them to fun outdoor activities like camping, hiking, skiing and skating. When I have a moment of my own I like road biking and ski touring.

5. Where do you hike normally?

I love hiking in the Canadian Rockies, but really any time I can get outside and walk, hike, bike, ski or snowshoe is great.

I hope to take our boys for their first backpacking trip this year. We’re also heading to Alaska this summer.