One of the most revered pilgrimages in the world, the Camino de Santiago has over eight different route options travelling through various topographies and countries in southwestern Europe. Whether you are wandering through the dramatic French Pyrenees, roaming along the serene Atlantic coast, venturing through the luxuriant meadows of Galicia, or navigating the mountainous region of Asturias, the seasonality of the area can vastly impact your pilgrimage. 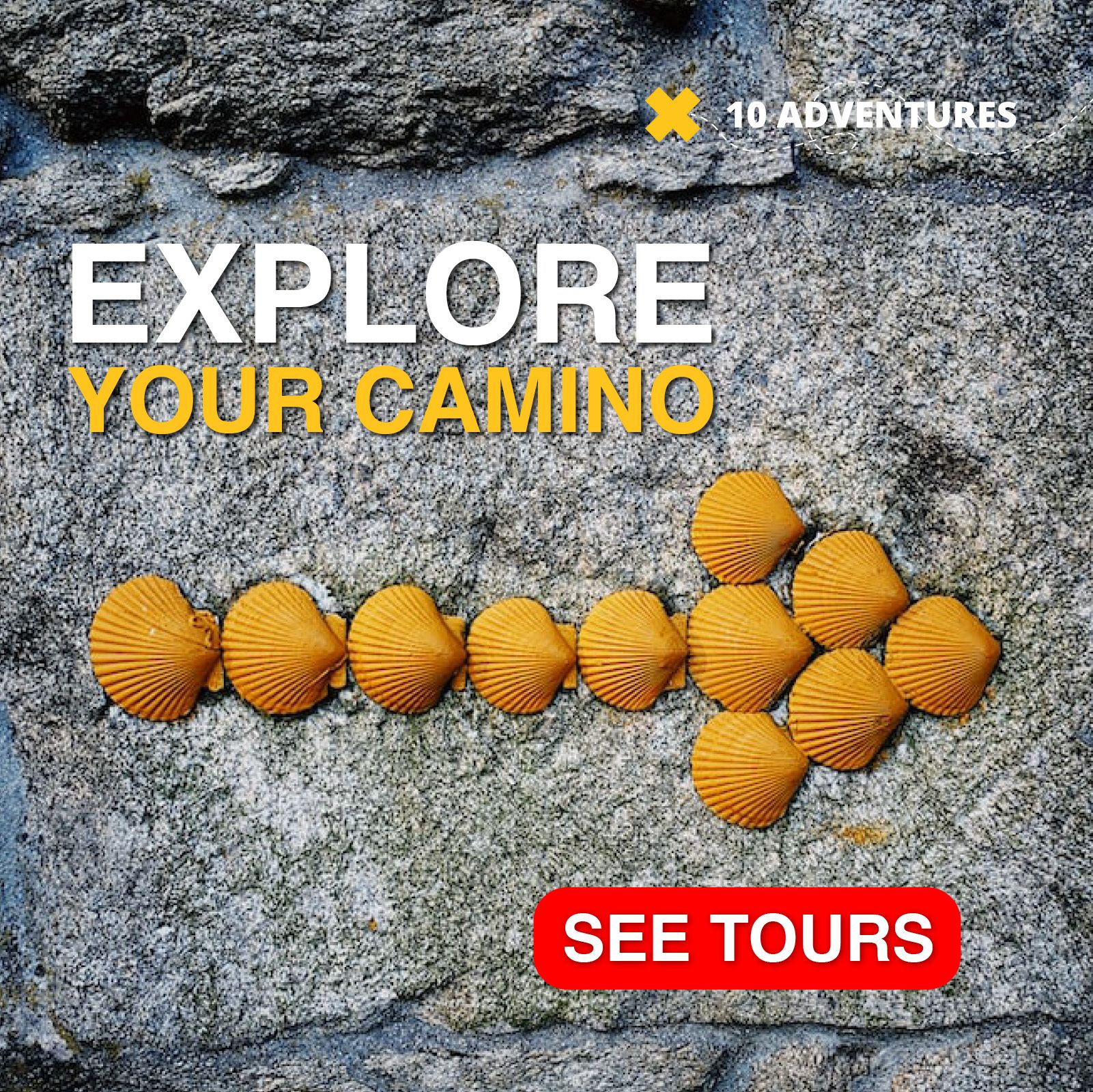 We here at 10Adventures want you to have the best experience possible when conquering this ever-so magnificent adventure, and picking the right time of year to visit is incredibly important. All culminating in Santiago de Compostela, the routes to the spiritual destination are subject to different weather conditions, which can make planning, and choosing a trek a daunting undertaking. Let us help as we disclose some of the most beloved pilgrimage route’s seasonalities and the best time of year to visit.

The best-loved Camino de Santiago routes are mostly located in Northern Spain, which warrants predominantly maritime conditions characterized by mild winters, frequent rainfall, and warm summers. Some routes, like the Camino Primitivo and Camino Francés, travel through high altitude mountain ranges, which are best avoided in the late fall and winter months due to the increasingly technical terrain. Most assume that July and August are the ideal months to trek the Camino de Santiago, but when travelling through exposed meadowlands, the heat can prove unbearable and the crowds, an annoyance.

We believe that the best months to adventure the pilgrimage trails are in May, June, September, and October for the ideal seasonality and thinned crowds. As the oceanic conditions often necessitate humid and rainy weather, you need to be prepared for sudden rainfall. Check out our Camino de Santiago packing guide for the practical items to bring along on your exciting expedition, including a rain cover. Additionally, organizing your pilgrimage can prove to be a stressful endeavour, refer to our extensive guide to the Camino which explores everything from route options, cost, and adventure tours. 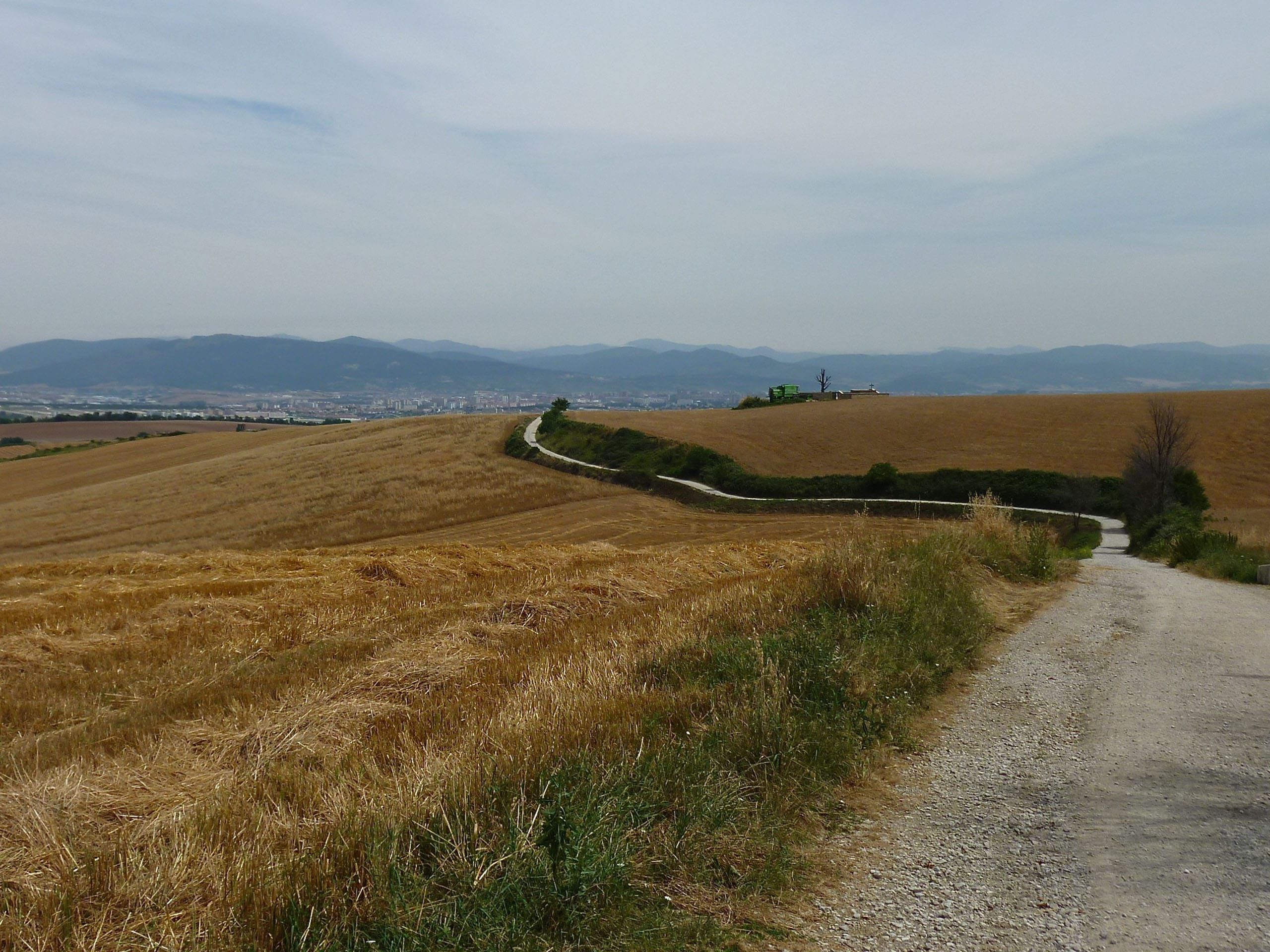 The French Way is best ventured in May, June, September, and early October

Best Months to do: May, June, September, and October

The Camino Francés is the most popular Camino de Santiago route that attracts the most pilgrims in July and August. Stretching over 780.0 km through various terrain and landscapes, this pilgrimage demands preparation and stamina. The month-long adventure travels through the French Pyrenees, the Meseta, the mountains of León and Galicia’s prolific countryside. The technicality of the high altitude climbs is only amplified in the winter months, thus; the French Way is best ventured in May, June, September, and early October. These months will guarantee lesser tourist traffic and more ideal weather conditions- not too hot, not too cold, and not too rainy. 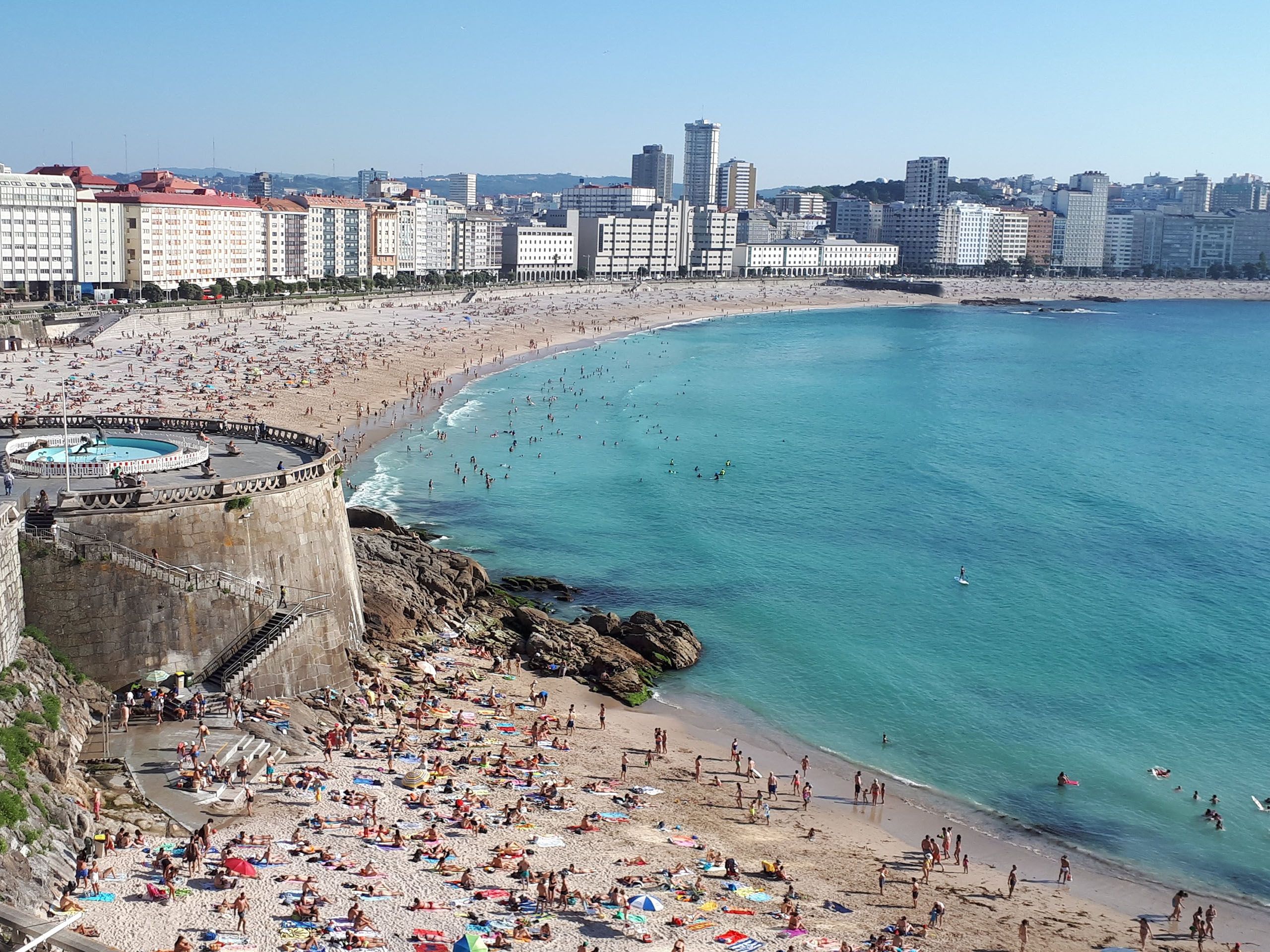 We suggest visiting the Camino Inglés in June, July, August, or September for the best climate

One of the shortest route options to reach Santiago de Compostela, the Camino Inglés travels along the Galician coast before exploring the countryside. Relatively level and easy to venture, the English Way is one of the few routes that can be comfortably walked year-round. Travelling near the coast, this trail sees milder winters, but rainier maritime conditions. We suggest visiting the Camino Inglés in June, July, August, or September for the best climate. Note though there is a breeze as you trek near the Atlantic Ocean, walking inland in July and August can be extremely warm! 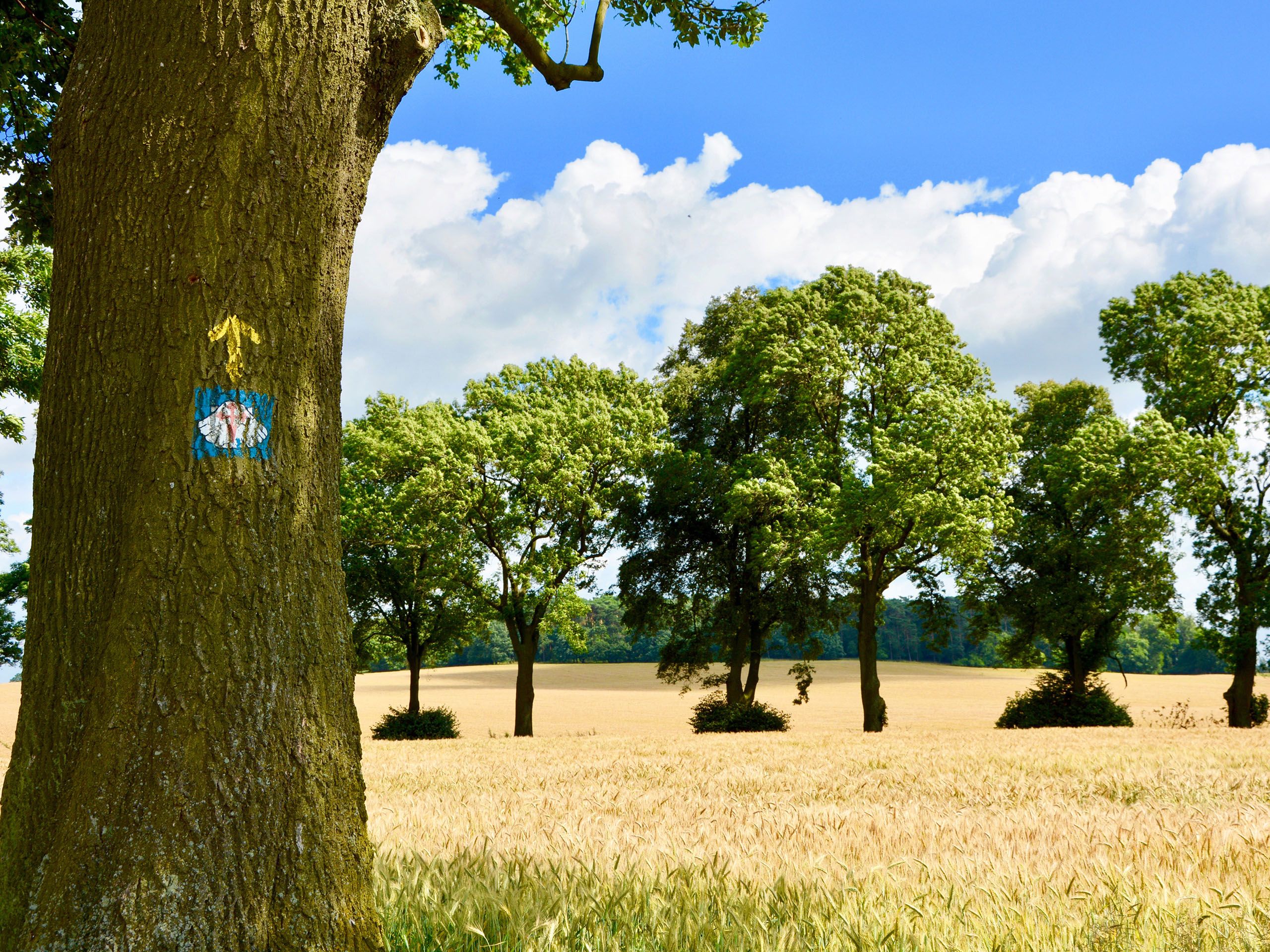 Best Months to do: June, July, and August

The oldest passage to Santiago de Compostela, the Camino Primitivo is also one of the less frequented. Though relatively isolated, the Primitive Way’s busiest season is in July and August when the weather is best. Like the French Way, the Camino Primitivo travels through Northern Spain’s mountainous regions, increasing the technicality of the pilgrimage with snowfall and rain. For this reason, the Camino Primitivo is best avoided in the winter due to the challenging terrain, the closed albergues, and unmaintained paths in the off-season. Travelling through Galicia and Asturias warrants a rainy and chilly climate even in the summer, so we urge you to venture this route in June, July, and August for the best chance at warm and less rainy conditions. 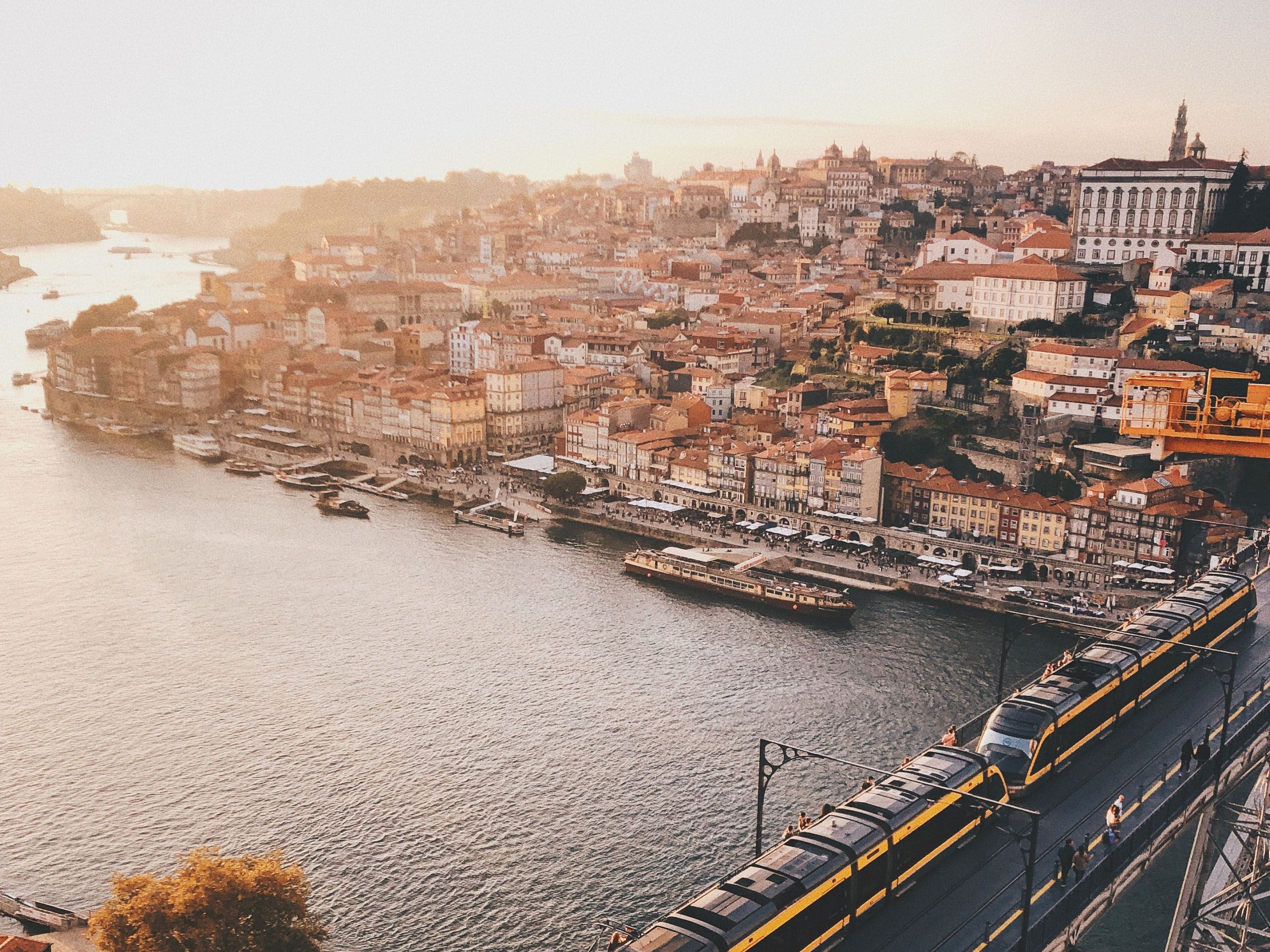 The Camino Portugués is an impressively scenic route

Best Months to do: May, June, September, and October

The Camino Portugués is an impressively scenic route that travels along the coast, or inland from Portugal all the way up to Galicia. Travelling near the coast warrants mild and rainy winter conditions and cooler summer treks. If you choose the inland trek, you can expect hot summer days– but they are often more sporadic manageable than summer conditions of other inland routes. For the ideal pilgrimage climate, we suggest venturing the Portugal Way in April, May, June, September, or early October. If you are trekking along the coast, you can hike in July and August, but it is important to be prepared for the odd scorcher. Camino Invierno is one of the most favourable winter routes

Best Months to do: September, and October

Although named the Winter Way, the Camino Invierno can be ventured year-round; though it is one of the most favourable winter routes due to the area’s low altitude and manageable terrain. Most often undertaken by Camino Francés pilgrims, this Camino Invierno is a great option for those seeking to avoid having to navigate the mountains of O Cebreiro or to escape the crowds of the French Way’s last 100.0 km to Santiago de Compostela. It is worth noting that travelling the Camino in the winter months is not only more technical but finding accommodations can prove a challenge. We recommend trekking this pilgrimage in September and October when the vineyards are vibrant, or in the late spring before the crowds arrive. Camino Finisterre - Travel along the coast up to Muxía

The Camino Finisterre is a short extension of the traditional Camino de Santiago which travels east from Santiago de Compostela to the coast of the Atlantic Ocean, or “the end of the world”.

Leading to Cape Finisterre, there is an option to add on to the journey and travel along the coast up to Muxía. The proximity to the shore warrants oceanic weather conditions, like the English Way. To avoid extremely rainy walks, we like to venture this route in the months from June to September, when the weather is warm, and the skies are (mostly) clear!

The Camino del Norte is a prolonged pilgrimage that extends over 800.0 km through the regions of the Basque Country, Cantabria, Asturias, and Galicia. One of the more popular Camino de Santiago routes, this trail travels along the scenic coastline of the Atlantic Ocean. Enjoy the maritime conditions which warrant rainy, mild winter months and cooler summer days. Like the routes of the English Way, the Camino Finisterre and even the coastal Camino Portugues, the Northern Camino is best enjoyed in June, July, August, and September when the conditions are less rainy and warm. Travelling along the coast through popular tourist beach towns, expect to see crowds in the summer months as you walk in the company of other pilgrims.

Best Months to do: April, May, and June

Vía de la Plata is the longest and most sequestered route to Santiago de Compostela. Departing from Sevilla, Spain, this trail stretches over 1,000.0 km through the regions of Andalusia, Extremadura, Casilla y Leon, and Galicia. The primitiveness of the route warrants less pilgrim infrastructure such as accommodations and facilities, thus it is best to trek during the peak season. Additionally, Vía de la Plata also travels through arid terrain, making the pilgrimage unbearably hot in the summer months, trust us. We highly suggest tackling this route in April, May, and early June for the best climate– warm and less rainy, more open facilities, and likely some company along the way.

Some of the above-mentioned routes prove more taxing, such as the Camino Francés, the Camino Primitivo, and Vía de la Plata. If this is your first pilgrimage and you hope to accomplish the whole trek, then we highly suggest conditioning and training before embarking on this adventure. Check out our Camino de Santiago preparation guide for a comprehensive list of everything from recommended training, required documentation, and vaccination needs for your life-changing adventure to Santiago de Compostela.