All You Need To Know About the Cleveland Way National Trail

Explore quintessential English scenery by foot along the incredible Cleveland Way National Trail. The 110-mile path will take you past heather moorland, soaring oceanside cliffs, and calming forests. This remarkable walking adventure is tailor-made for you if you want to get to know England’s backstory, its scenery, and quaint, tucked-away villages. This article will dive into everything you need to know about the Cleveland Way National Trail!

The Cleveland Way is a National Trail in Cleveland of England, running 110mi from Helmsley and the Brigg at Filey. It was developed in the 1930s after the Teesside Ramblers’ Association dreamed of a long-distance walking route that linked the Hambleton Drove Road, the Cleveland Escarpment, and the Yorkshire coast. In 1969, the trail was officially open and saw its first trekkers. Now, thousands of people take to walking the Cleveland Way National Trail each year, soaking up the incredible landscape of the region from moorland to coastal bliss. 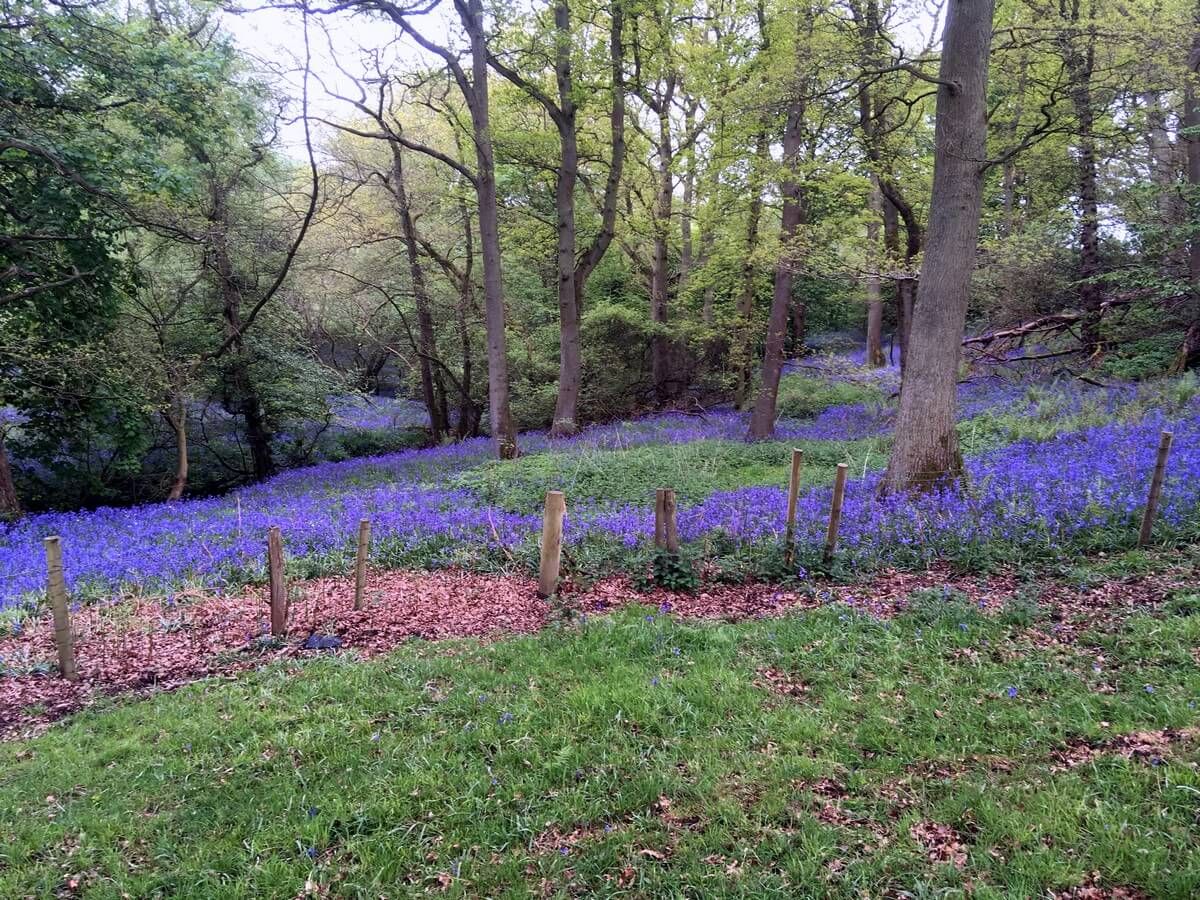 Views on the Cleveland Way, near Osmotherley

The Cleveland Way has two trailheads, one at the lovely market town of Helmsley and one at coastal Filey. The lowest point of the trail is at sea level, and the highest point gains up to 454m in elevation at Urra Moor. The route follows a horseshoe shape and can be walked either way. The first portion of the route covers classic moorland and forests, the middle section traverses North York Moors National Park, and the final section is some of the finest coastal walking in the country. Walking the entire Cleveland Way takes anywhere from a week to 11 days depending on your speed.

If you’re taking on the Cleveland Way, you can download this GPS route to help guide the way.

Take a look at the Cleveland Way route:

There are plenty of hotels to choose from along the Cleveland Way. Where exactly you rest your head depends on how far you’re going each day, but the official National Trail website clearly lists their recommendations for hotels at each stop on the trail. There are luxurious stays, basic hotels, cozy bed and breakfasts, and campsites to choose from depending on what you prefer. Below, we recommend a few great hotels for standard stages of the route. 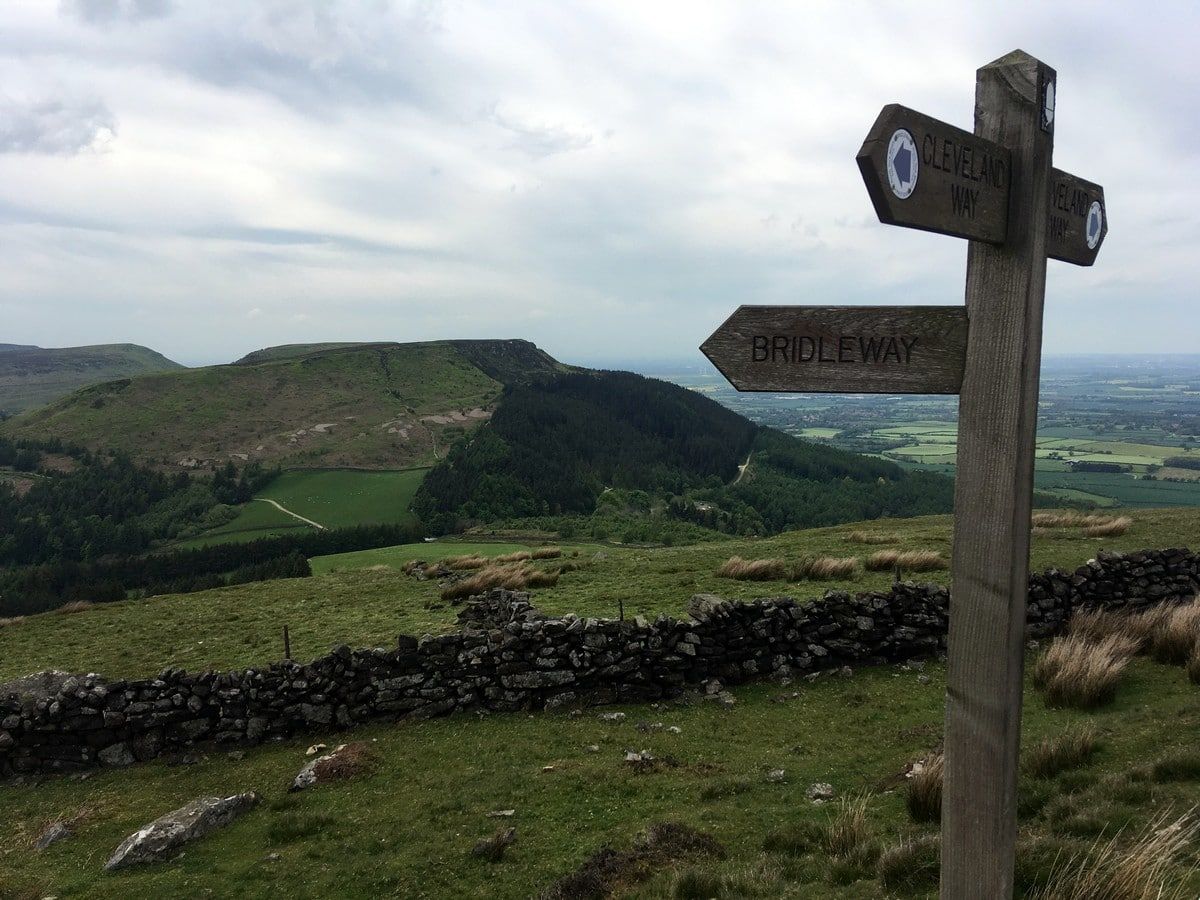 Views on the Cleveland Way, near Chop Gate

While there are nearly endless ways you could explore the Cleveland Way, here is our suggested itinerary for a 10-day walking journey. Of course, it all depends how far you want to go in a day!

The first day of walking the Cleveland Way begins from Helmsley, departing from the market square and passing Rievaulx Abbey on the way out. There’s a gentle climb up Hambleton Hill, and then you’ll continue through several hamlets to stay at for the night- Sutton Bank is a popular choice.

Cleveland Way trail leads out of Sutton Bank and along the Hambleton Hills, skirting the national park on drive roads. You’ll walk along moorland, passing by grave mounds and historic sites. The high point of the day is Hambleton End at almost 400 mof elevation. The views here are great, which makes it a nice place to catch your breath. Then, it’s downwards to Osmotherley, a cozy market town with nice shops, cafes, and eateries. 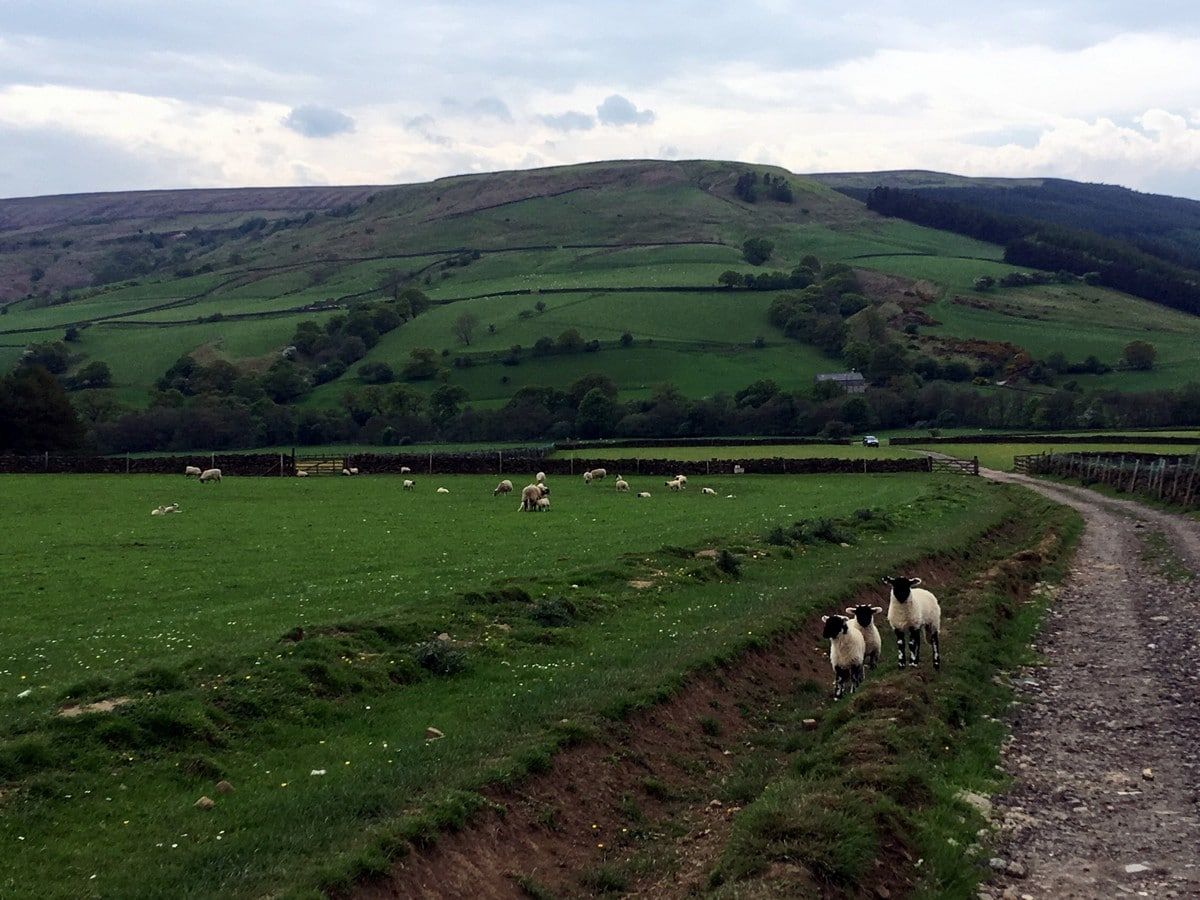 Day 3 of the Cleveland Way National Trail is often regarded as the most difficult of the entire trip, so prepare those knees for a bit of up and down. You’ll head off over the Cleveland Hills, some of the most scenic walking in North York Moors. You’ll be looking over farmland to the northwest and moorland to the southeast. Your accommodation today is likely going to be off the trail a bit, but lots of the lodges nearby offer free shuttle service.

Today’s portion of the Cleveland Way Trail might look shorter on paper, but by the end you will have conquered Urra Moor and Round Hill, which is the highest point of the entire journey at 454m. You’ll walk along wide sandy paths worn into the windswept moorland, enjoy your hilltop view (our favourite part of which are the plentiful purple wildflowers), and then descend into Kildale for the night. 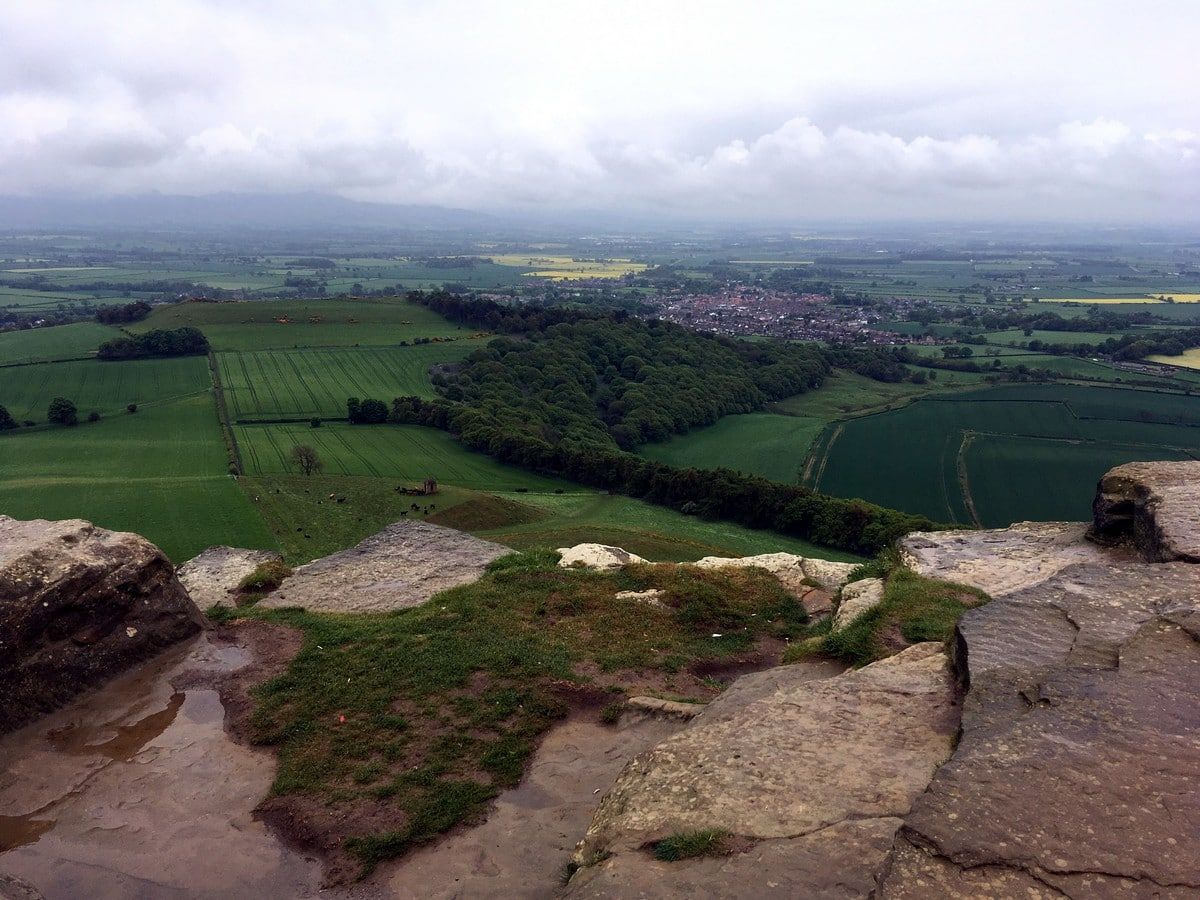 It’s time to walk alongside the sea! Today, along the Cleveland Way, you’ll leave moorland behind and start your trek towards the memorial of Captain Cook, through the town of Guisborough, and through the farms of Skelton before meeting the sea air at Saltburn. We recommend indulging on ice cream and fish and chips after the long day’s walk.

Walking along the coast is a highlight of walking the Cleveland Way, and today you get to soak up the sea views on your way to Staithes (pronounced “stairs” by locals). You’ll ascend a seaside cliff at Hunt Cliff, then again at Boulby, the highest of its kind on the east coast of England. While you do lose your elevation a few times today, but dinner and dessert in the pristine fishing town of Staithes is worth all the work.

The Endeavour Restaurant with Rooms 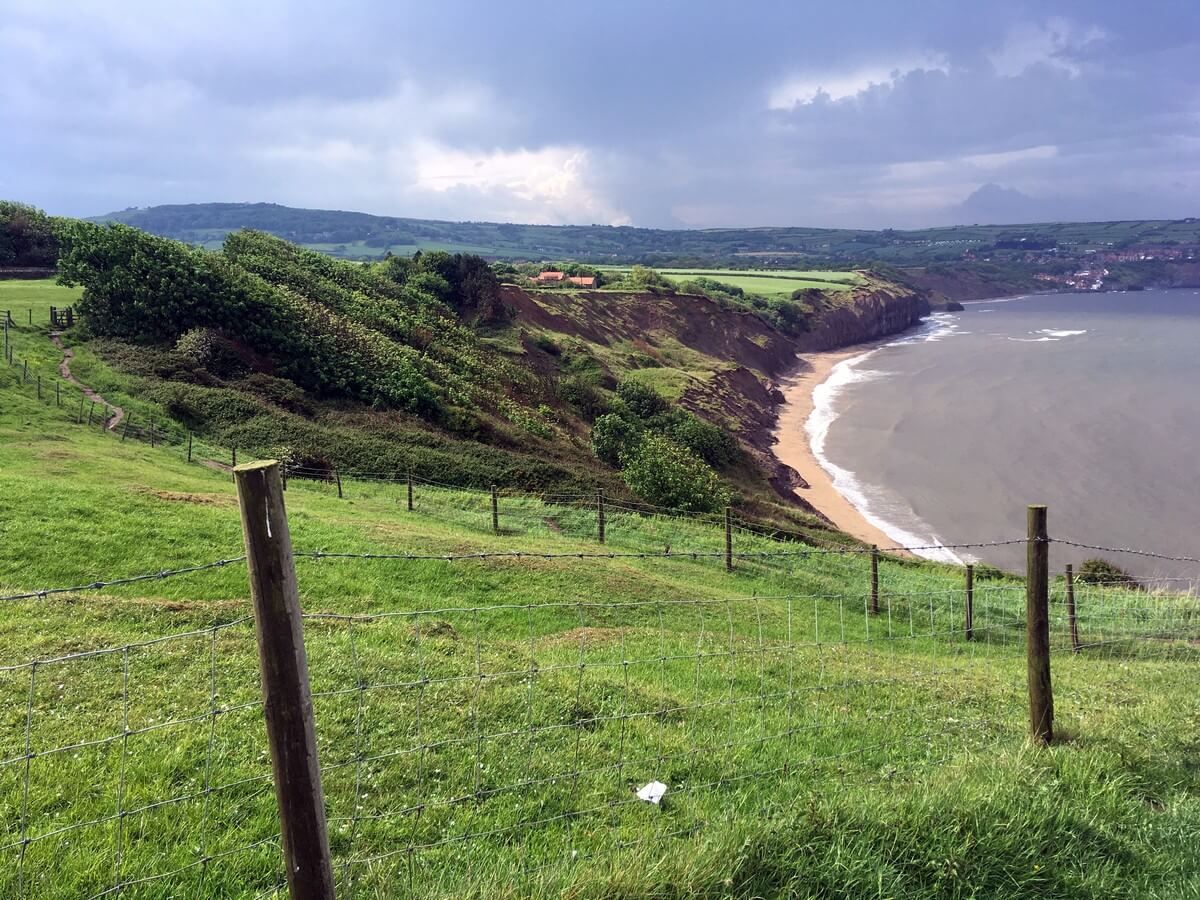 If you didn’t get your fill of the coastline yesterday along the Cleveland Way, today will be another beautiful coastal walk. You’ll ascend the cliffs to Runswick Bay and then to Upgang Beach, a sandy 4.8km stretch that you’ll follow until you reach Whitby Bay. This town draws tourists from all over, and claims to have the best fish and chips in the British Isles. You’ll have to taste test for yourself.

Today might seem short in comparison to the rest of your Cleveland Way walking tour, but it’s because the towns you’ll be in deserve your time. Histories of smuggling, fables of religion, and the story of Robin Hood himself are waiting for you at the end of your trip. You’ll pass along the cliffs of Whitestone Point, come across waterfalls, cross picturesque beaches, and then arrive in Robin Hood’s Bay for the evening. Now, to find someone to ask about the history... 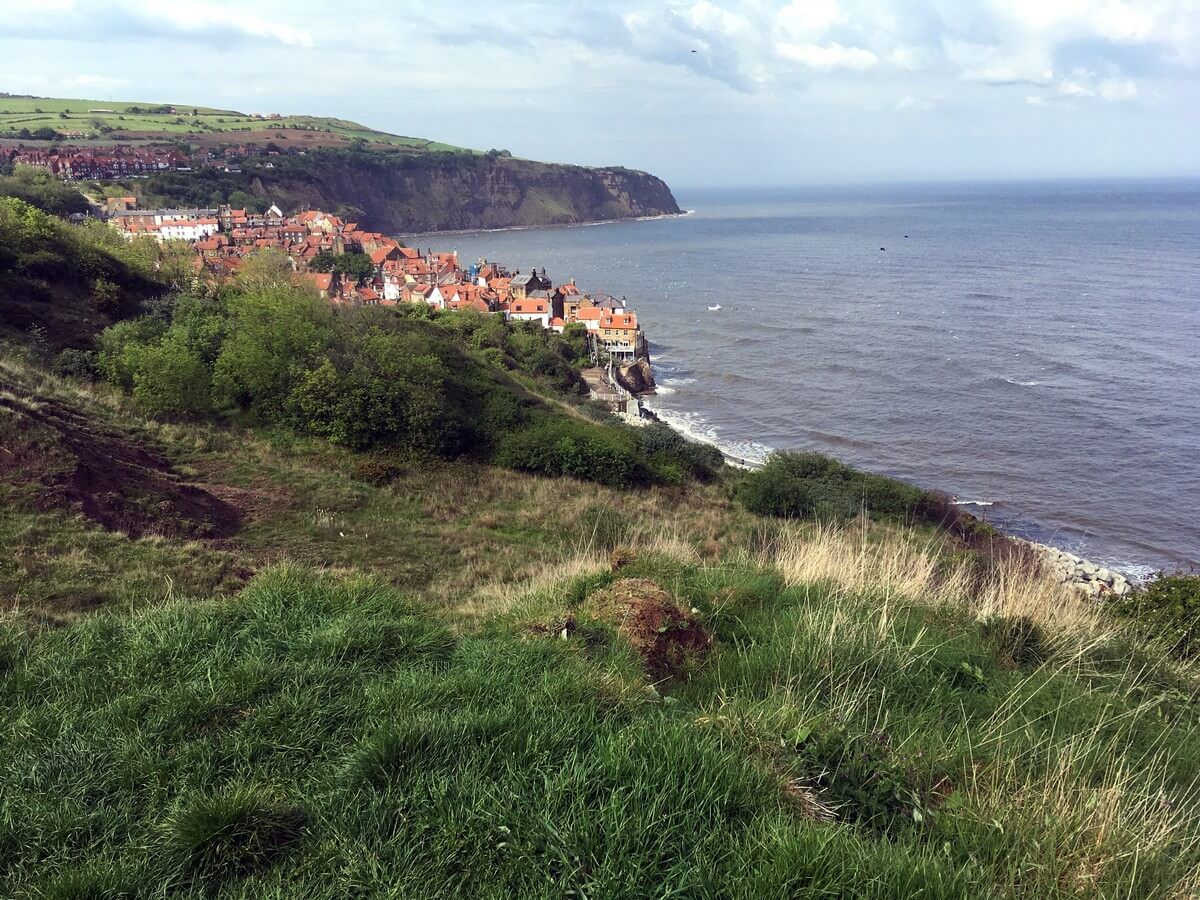 Stage 9 of the Cleveland Way has you embarking towards Scarborough, a resort area popular with British vacationers. It might come off as a bit kitschy to some, but it’s charming in its own right, and there are plenty of treats around if the walking has worked up your appetite. You’ll ascend and descend over and over across seaside cliffs, accompanied by stellar views the entire way.

The very last stage of the Cleveland Way walk departs Scarborough and takes you along the open land and golf course beside the ocean at Cayton Bay. There is an old castle and a spa here if you’d like to spend some time exploring (or getting pampered!). Then, it’s along more seaside cliffs to milepost 103, which technically ends the journey. However, most people will continue a ways to Filey and end their Cleveland Way route at the North Cliff Country Park of Filey Brigg. 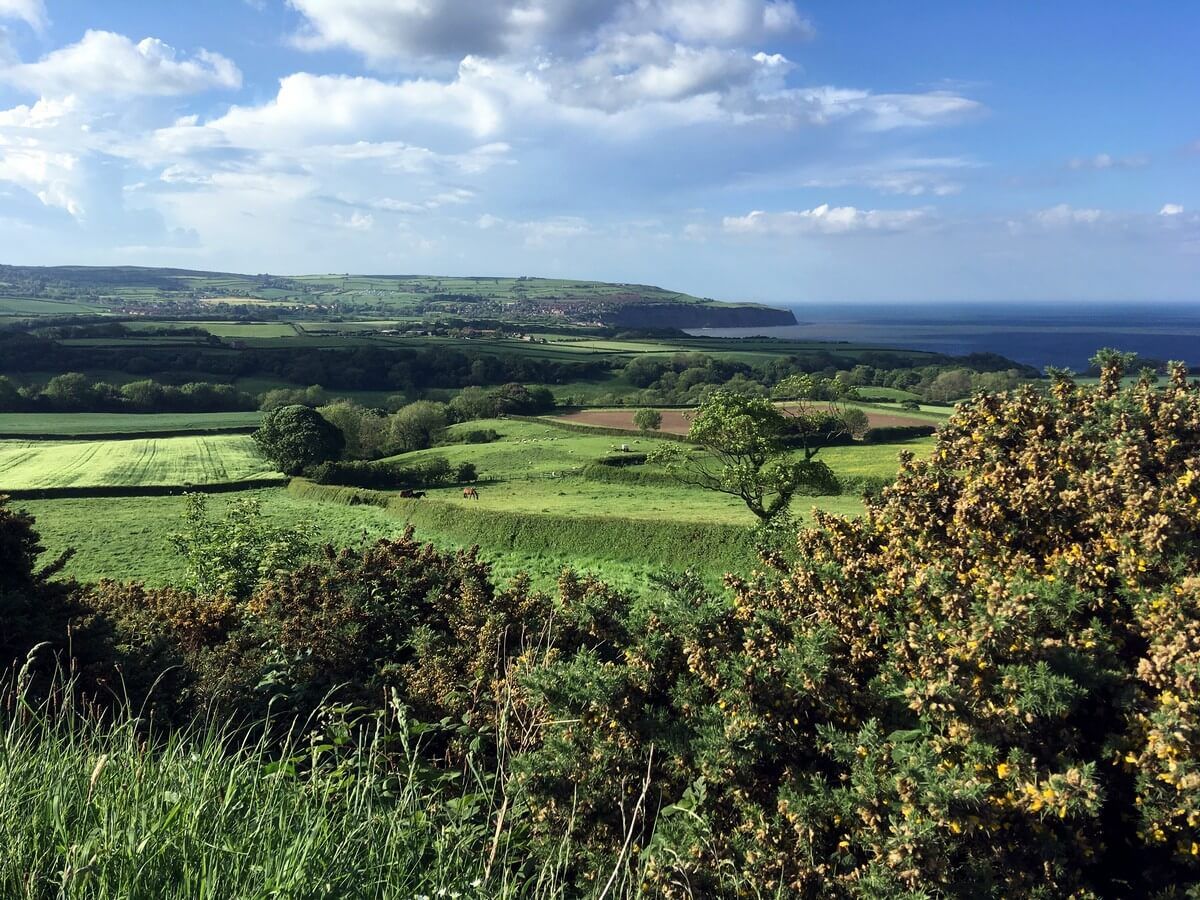 After The Cleveland Way National Trail

There isn’t a well-established tradition after completing the Cleveland Way like there is for some other long-distance walks in the UK, but we suggest finding a local pub, grabbing a pint, and revelling in your success! The Chophouse at The Station and The Star are solid choices in Filey. Who knows, maybe you’ll run into some other walkers and start your own tradition.

Food on the Cleveland Way Trail 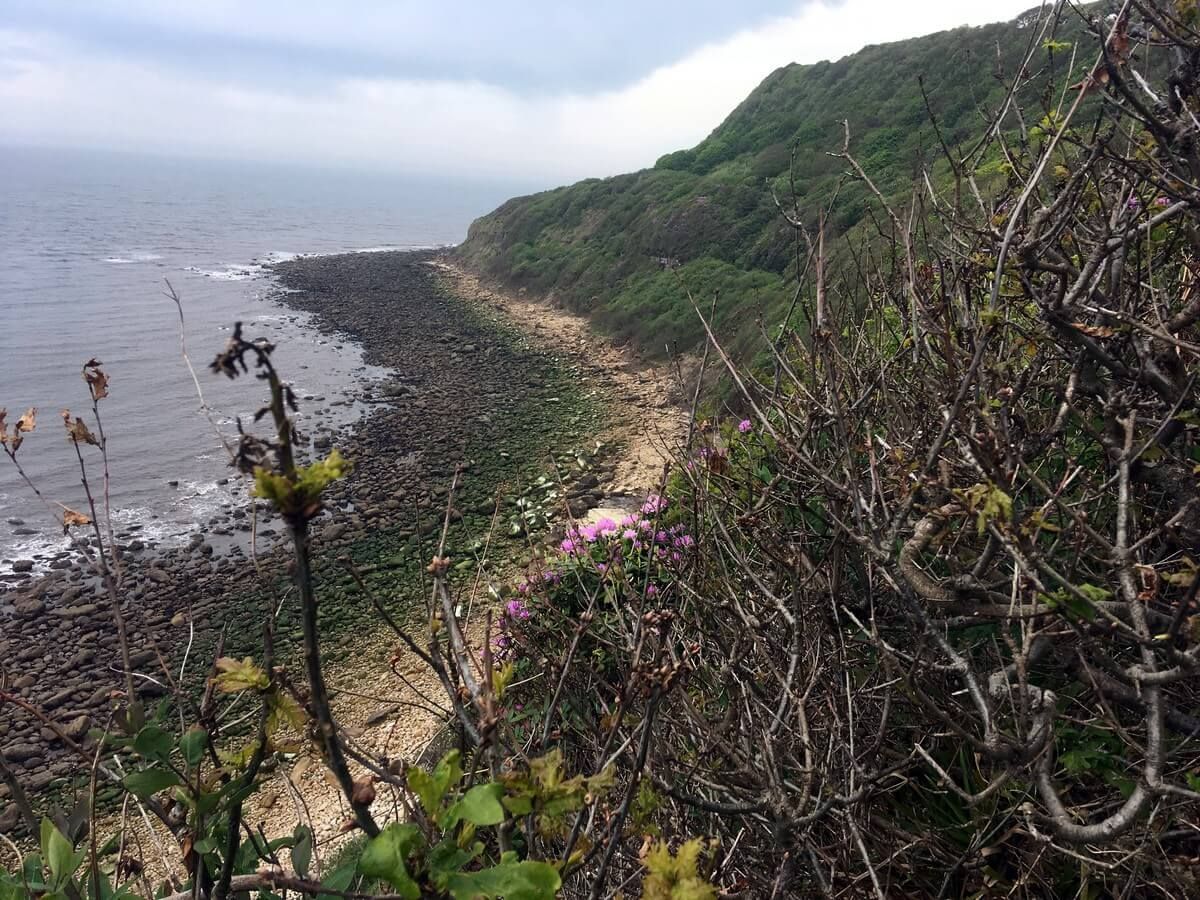 Best Time to do the Cleveland Way Walk

The Cleveland Way walk could be completed any time of year, but to enjoy the best weather possible it’s best to do the walk between May and October. The later days of summer (late August through the beginning of September) are when the heather moorland is most spectacular. Spring and fall might bring cooler weather, more wind, and more rain, but are a good pick for those wanting to avoid summer heat. Pack your clothing and gear accordingly and you’ll be set no matter the month!

Interesting Facts about the Cleveland Way 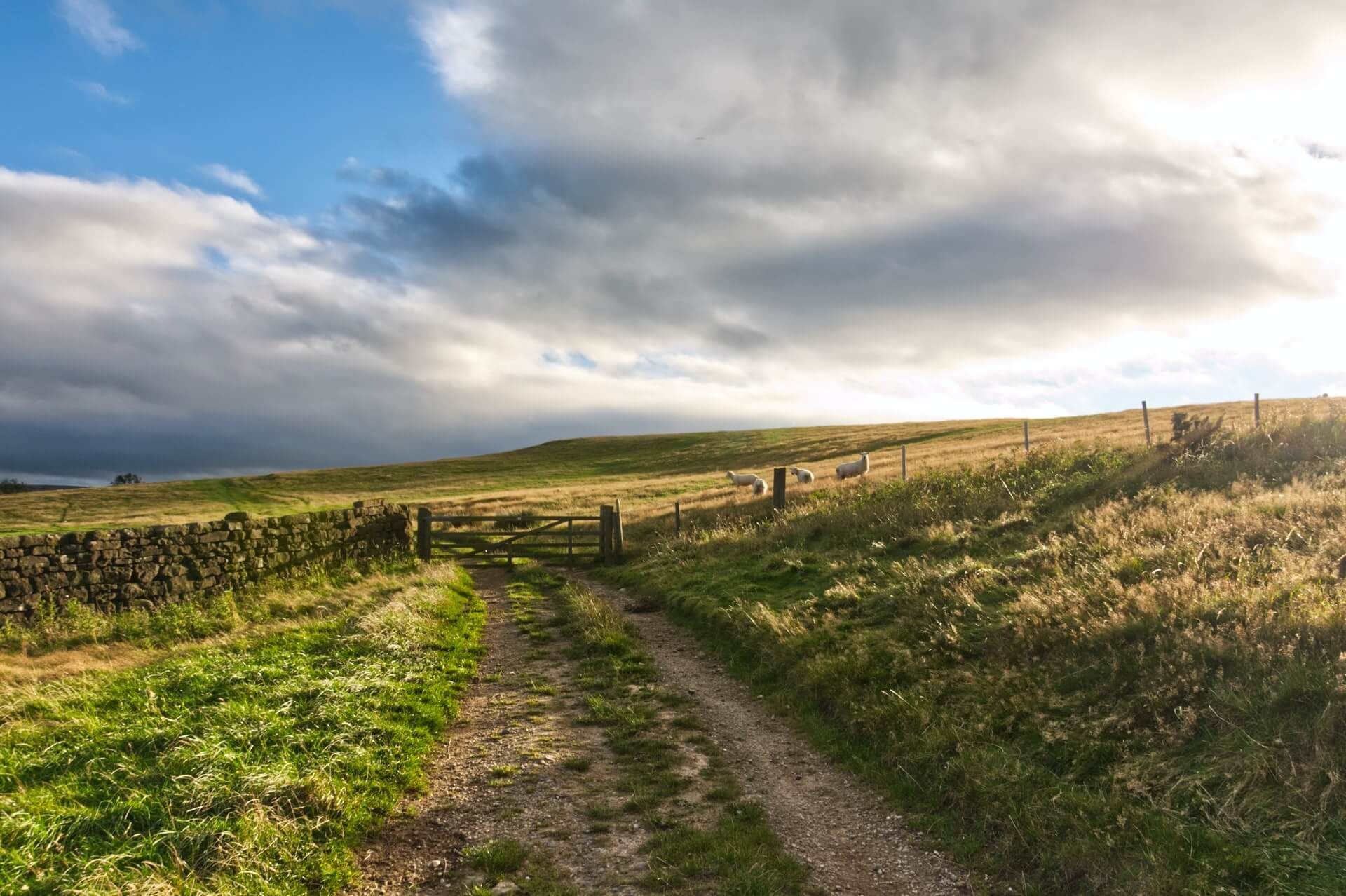 How long does it take to walk the Cleveland Way?

Most people walk the Cleveland Way in anywhere from a week to 12 days. 10 days tends to be the most popular time frame, as it allows some time to explore the towns along the way while still keeping a fair pace.

Is the Cleveland Way easy to navigate?

The Cleveland Way is marked with the traditional National Trail acorn symbol on posts along the route, as well as mile-markers. It’s a well-established trail, making it fairly easy to follow.

Where does the Cleveland Way start and end?

The Cleveland Way has two trailheads, Helmsley and Filey. While most people start the route from Helmsley, you can certainly start at Filey as well. Those who like to walk the trail more than once often start the trail from each end at least once to try the route both ways.

How far should you walk in a day?

Most walkers travel anywhere from 9.7 km to 24.1 km in a day depending on that day’s demands and how quickly they want to complete the trail. To keep to a standard 10-day itinerary, the distance per day fluctuates between the 9.7 km and 24.1 km mark.

Can you walk part of the route?

Yes! Many people will walk half of the Cleveland Way route, or customize their distance depending on how much time they have. Saltburn is generally the objective for the halfway trip, but you can choose your endpoint based on your own wants and needs.