An Ultimate Guide to the Peak District National Park

The Peak District is an unforgettable walking destination. As one of the most picturesque areas of the UK, it became Britain’s first designated national park in 1951. There are so many things that make this region special. The geology is fascinating, with the Dark Peak’s gritstone (coarse Sandstone) on the north end of the park and the White Peak’s limestone in the south. Walking through the park is like yin and yang. We also love the caves and rivers in the area, which provide hours of entertainment and exploration. Being able to switch to exploring a cave or rafting down a river is an awesome way to break up the hikes, which are fantastic in their own right!

Within the 555 square miles spanning Peak District National Park, you’ll find a number of walking paths, horse trails, climbing sections, and cycling routes carved into the lush undulations sprawling across Britain’s countryside. Tucked into the rolling hills and picturesque rural views sits remnants of the Stone Age, Bronze Age, and Iron Age. And the bombardment of fantastic scenery paired with historical wonders continues with the grand houses and castles dotting Britain’s first national park. Several people love to visit the Chatsworth House, as well as walk up to Peveril Castle.

There are lots of cute towns inside the Park, as well as larger cities right on the borders. We always love staying in the small towns, but sometimes it’s easier to be in the big city. If that’s the case with you and your travelling companions, we would recommend Sheffield as the city closest to the majority of our hikes, and it also happens to have some great restaurants.

We think you’re going to love the Peak District. There is something about it that is so unique. It’s not overly commercialized. All the accommodations are special and different. On its surface, it can seem like any other park, but once you get there you’ll notice it too. This place is special. 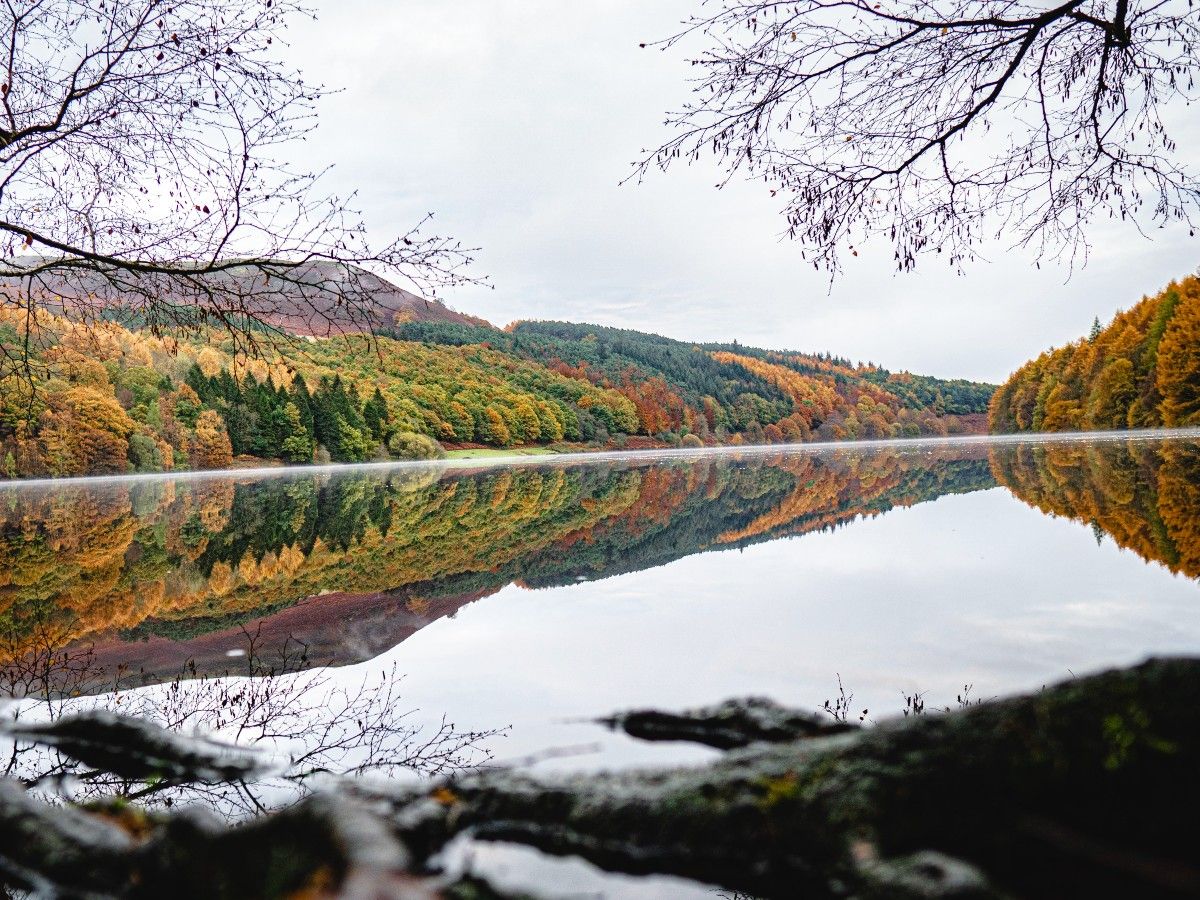 Autumn near Castleton at Peak District

How to get to the Peak District

The Doncaster Sheffield Airport is a convenient destination since the accommodations in Sheffield are a common pick for Peak District travellers.

If you’re looking to drive yourself to the Peak District, you’re in for a treat! It’s a beautiful park for a road trip.

From Sheffield, it’s a quick 35-minute jaunt to the park via Abbeydale Road and A621. From East Midlands, it’s about 40 minutes on A50 and A515. From Manchester, it’s just under an hour’s drive to the park via A5103. Driving from Birmingham Airport to the park takes just over an hour via A38. From Liverpool, it’s about an hour and twenty minutes via M62.

Once you’re in the park, consider taking a cruise down the incredibly scenic Snake Pass or Winnats Pass.

When to go to the Peak District

The Peak District likes to boast that any season is suited for a visit. In our opinion, March to May, September, and October are the best months. The kids are still in classes, the rain is down and the air has that crispness to it makes walking all the more enjoyable.

In the summer the crowds will increase, but there are also a lot of fun festivals and fairs to check out. Winter doesn’t need to be avoided entirely, but we don’t usually like hiking when the mercury floats around the negatives.

Average Monthly Temperature and Precipitation in the Peak District

How to Get Around in the Peak District

It can be quite easy to use the train and bus system around the Peak District. The online train schedule is a useful and efficient tool for schedule checking. If you flew in from Manchester you can find a number of rail lines that will pass by the villages in the District.

There are a few bus and coach systems worth checking out. First off, if you’re coming in from Manchester you can take the High Peak Transpeak to Buxton, Matlock, Derby and quite a few other small villages.

Once you reach the Peak District, Megabus has a good website that can help you find some coach services to get from town to town. Finally, you can’t go wrong with the Derbyshire bus system.

Of course, you can rent a car if you prefer to be your own driver. Remember that Britain drives on the left. There are 27 free parking areas within the park, so you shouldn’t struggle to find a spot. 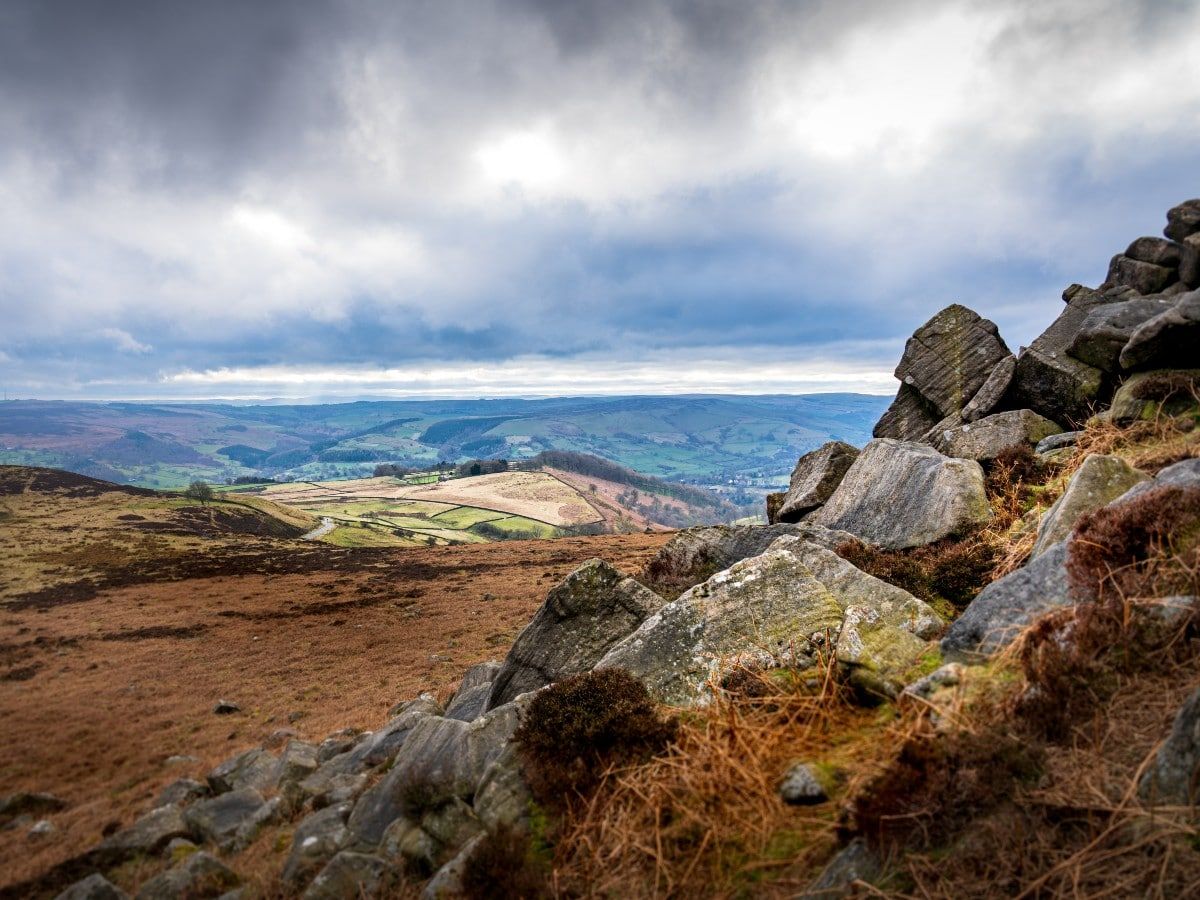 Where to Stay in the Peak District

The Old Hall Hotel in Buxton is our first recommendation. It’s not luxury per se, but we do think of this as a more comfortable stay. It’s in an older building, claiming even to be the oldest hotel in England. Despite these claims, the bathrooms are very well renovated. Being in Buxton gives proximity to restaurants and amenities, but it also means a bit more of a commute to the walks.

Want something in the park with a little more pizazz? You need not look any further than Hassop Hall near Bakewell. This estate has a recorded history dating back over 900 years. The rooms have luxurious furnishings and even nicer bathrooms. It makes for an unforgettable stay!

If you want luxury without the big hotel feel we absolutely love the Wheeldon Trees Farm Holiday Cottages. The owners are lovely and have seemingly thought about everything. They offer kid and dog-friendly cottages with lovely touches throughout. Their breakfast bucket, despite sounding like an item from an American truck stop, is actually a cute bucket filled with fresh baked goods, tea, and homemade jams. It’s such a charming way to start the day, don’t forget to ask for yours!

Our last old converted estate option is perhaps the coolest on the list. The YHA has a hostel in Castleton that has to be the best-looking hostel we’ve ever seen. Converted from an old estate, the hostel sits on a huge parcel of land, has beautiful dining halls and recreation spaces, and still retains the comfortable price point you’d expect.

Staying in Sheffield when visiting the Peak District is great for social butterflies. It allows you to hike while also being around a bigger city, and sometimes it’s nice to hit the town after a day of walking. For a great mid-scale place we like the Garrison Hotel. It’s very well kept, it has a great full English breakfast, and it’s in an old, stone army barracks. It’s a unique spot and the service doesn’t disappoint.

Finally, we always like to include a great camping option. Lathkill Dale campsite is in the heart of the Peak District and is a really superb spot. There is free hot water on-site and it’s within stumbling distance of the local pub. 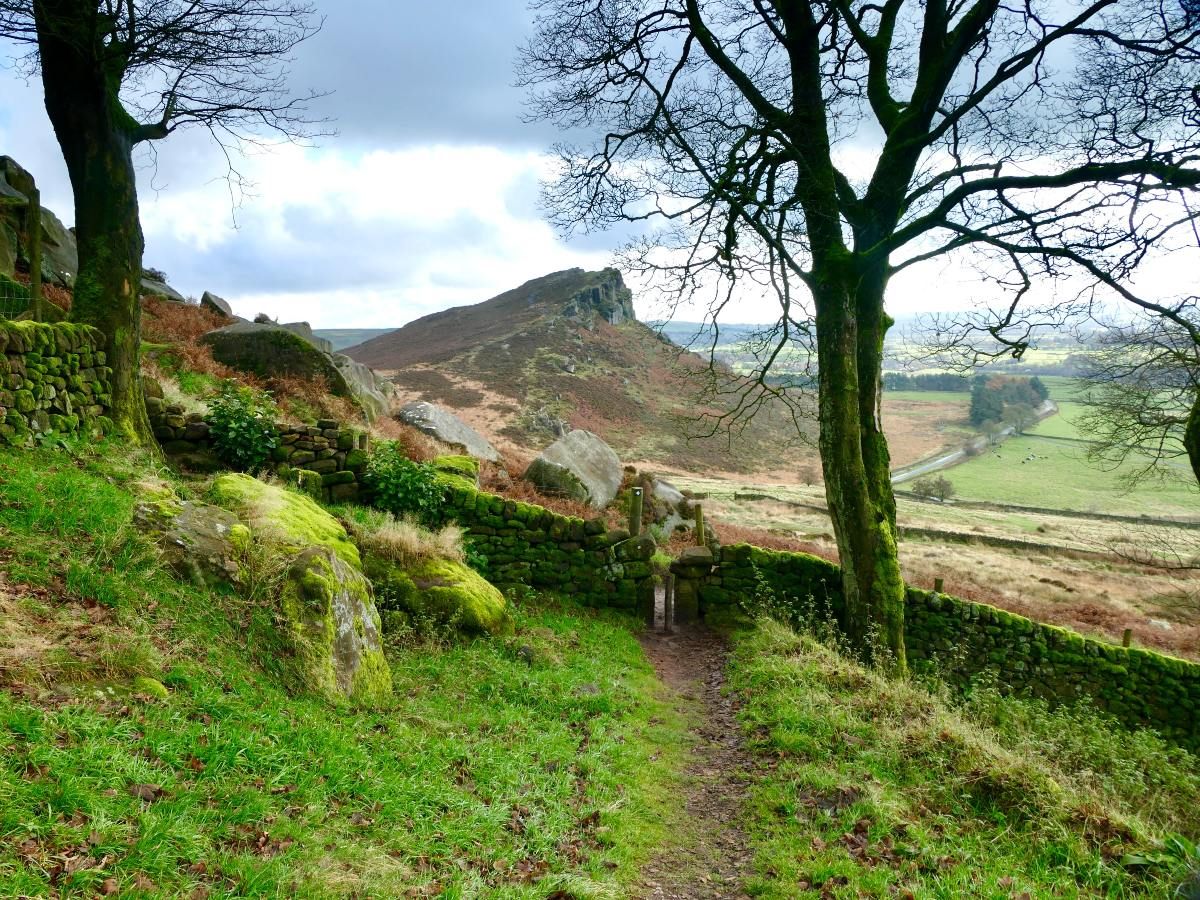 Where to Eat in the Peak District

There are lots of great restaurants sprinkled throughout the park, but not so many that offer fine dining. You’ll have to jump to Sheffield to find a fine dining option. Rafters is at the top of our list for a fancy evening out. They offer unique tasting menus and their service is exceptional. We love the modern interior with the exposed brick, but most of all we love the food. For a tasting menu it’s not overly cerebral, so you can enjoy every bite for its flavour and texture without too much fanfare.

For a proper British tea room look no further than Tilly’s of Castleton. They do a great high tea of course, but they also have fantastic dinners, serving up great British fare.

Of course, if you’re planning a trip to the UK you must find some good Indian restaurants to visit. Our recommendation is The Shalimar in Matlock. It’s on the southeast edge of the park, and the food is amazing! Make sure you start with some of their poppadoms, which are perfect to snack on while you decide what curries to order. This is one of the ten best Indian restaurants in the whole UK, so don’t pass it up.

If we’re covering all of our British meal bases, then our chip shop recommendation would have to be Ranmoor Friery in Sheffield. Sure, it’s a bit out of the way and the building itself might seem unassuming, but it’s all worth it. This is a chippy that takes care and does it right with no mucking about. You’re going to get your food fresh and not greasy.

If you want to grab some lunch on a rainy day, you should check out Scarthin Books of Cromford. It’s got a great vegetarian menu, a cute café, and loads of second-hand books to browse. We love popping in here even if it’s just for a coffee. 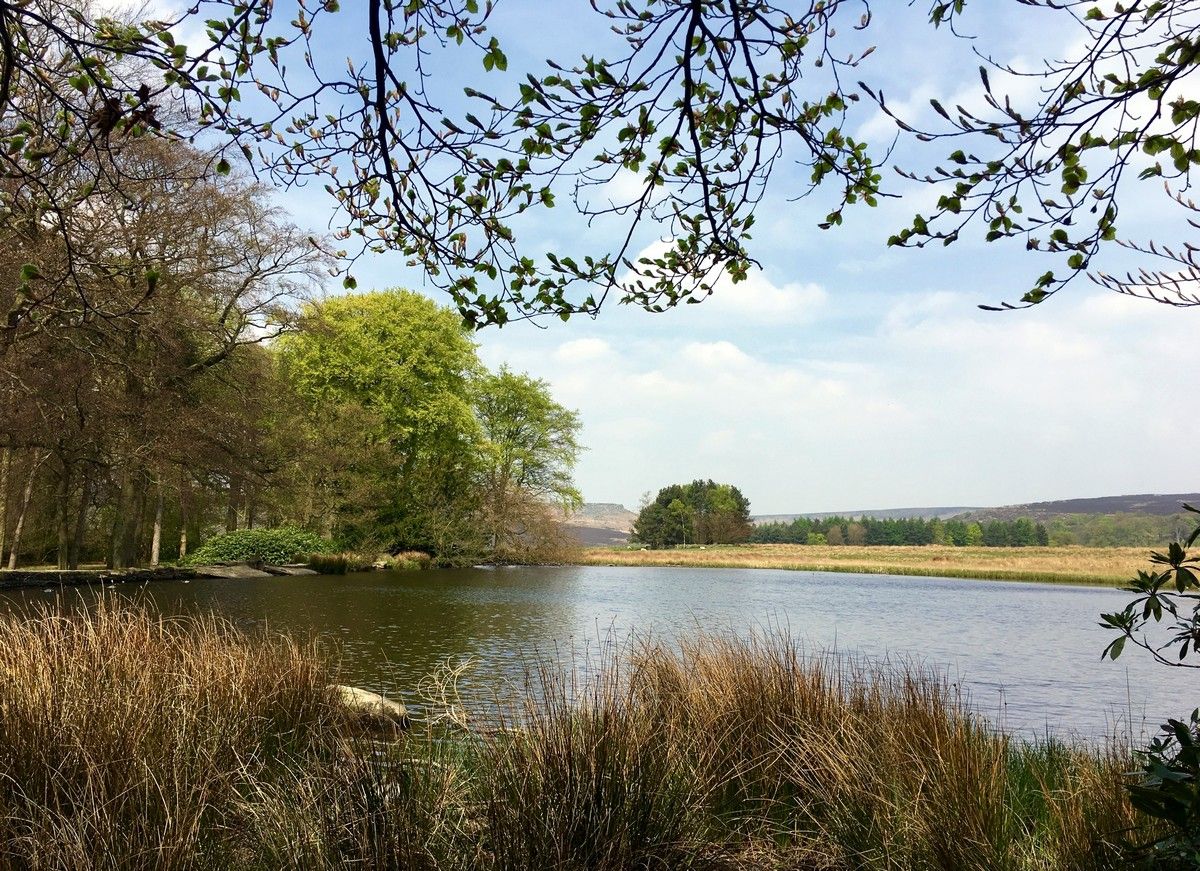 The pond at Peak District

Things to do in the Peak District

One of the main attractions of the park, is of course the stunning Peak District walks. But there is no shortage of things to do in the Peak District! From caves to castles and everything in between, here are some of the must-dos in the park besides walking.

A very cool Peak District experience is visiting one of the many caves and caverns. In Buxton they have Poole’s Cavern, which is full of eroded rock, stalactites, and ancient history. Their guides are top-notch, and it’s not worth missing. If you’re not hitting Buxton you can go to the cave in Castleton called Treak Cliff Cavern. We prefer the one in Buxton, but this still has the stalactites everyone loves to see. They also have this beautiful “Blue John” stone that they mine from the cave, which makes for beautiful jewellery.

One last cave to add to your list is the Heights of Abraham in Matlock. These caves are great for families, with fun little playgrounds for the kids. Additionally, they also have an entertaining cable car, which is where their name comes from.

If you’d prefer castles and estates to caves and caverns, then head to the beautiful Chatsworth Estate. The grounds are lovely to stroll around, and there’s even a farmyard that the kids will love. The teatime they offer isn’t perfect, but the service is always very good. This is a great way to spend half a day.

Want to explore a castle? Pay a visit to Haddon Hall. Technically it’s known as a Fortified Medieval Manor House, but if you come here with your kids they’ll shout, “look at the castle!” not, “look at the Fortified Medieval Manor House!” It counts. Besides that, it’s a building full of history and sites to see that can fill a whole afternoon. It dates back to the 12th century and has seen many different owners in that period.

Our favourite little museum in the area is the Crich Tramway Village just south of Matlock. It has lots of exhibits on the history of light speed rail, but no worries if that sounds a bit dry. The real draw is a collection of great trams to ride, and the park where they’re located is spacious so you’ve got lots of ground to cover. You wouldn’t think this would be the kind of museum to make our list, but trust us when we tell you that you can spend a whole day in this place easily.

If you want some guided training for mountain biking, rock climbing, or caving we recommend Pure Outdoor. They know their stuff. If you want to experience some outdoor activities when you’re all done hiking these are the people to go to. 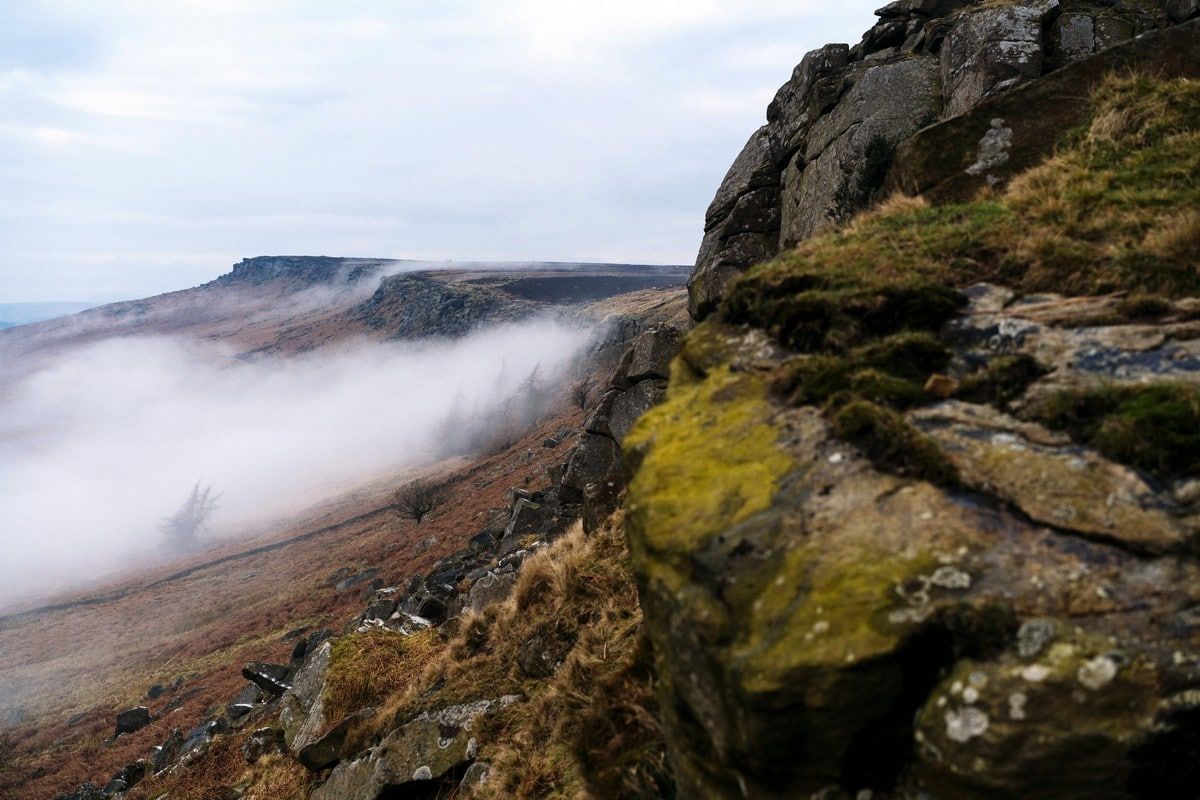 Views from looking out along the edge

Dangers in the Peak District 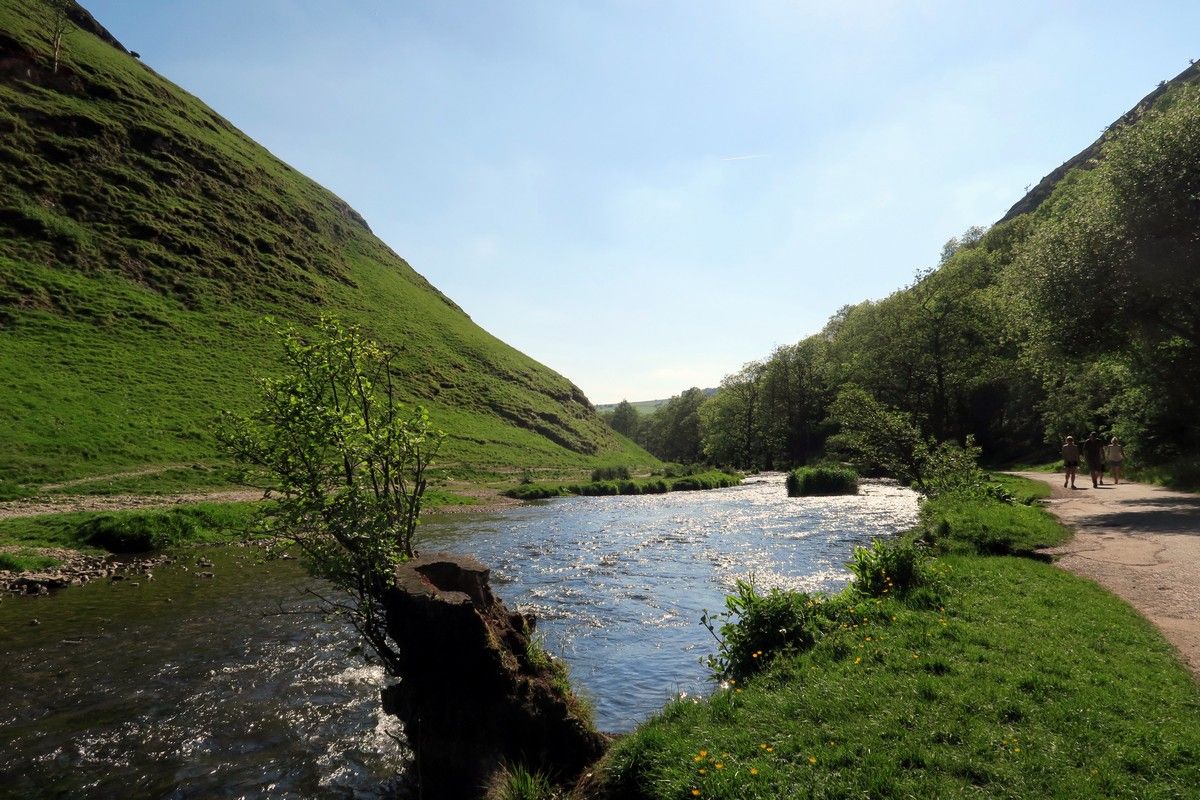 9 Interesting Facts About The Peak District