This vast country has an abundance of wilderness – start planning your next trip now!

“Climb the mountains and get their good tidings. Nature's peace will flow into you as sunshine flows into trees,” wrote environmentalist John Muir. Muir, who died in 1914, was perhaps America’s first environmental activist. The Scottish son of a clergyman, Muir believed in nature’s capacity to revitalize the human spirit and lobbied for the first national parks so ordinary people could reconnect with the wild. In today’s increasingly over-scheduled, screen-based world, Muir’s vision has never seemed more prophetic. Here are America's 10 best backpacking trips that will help you to rediscover the importance of nature. 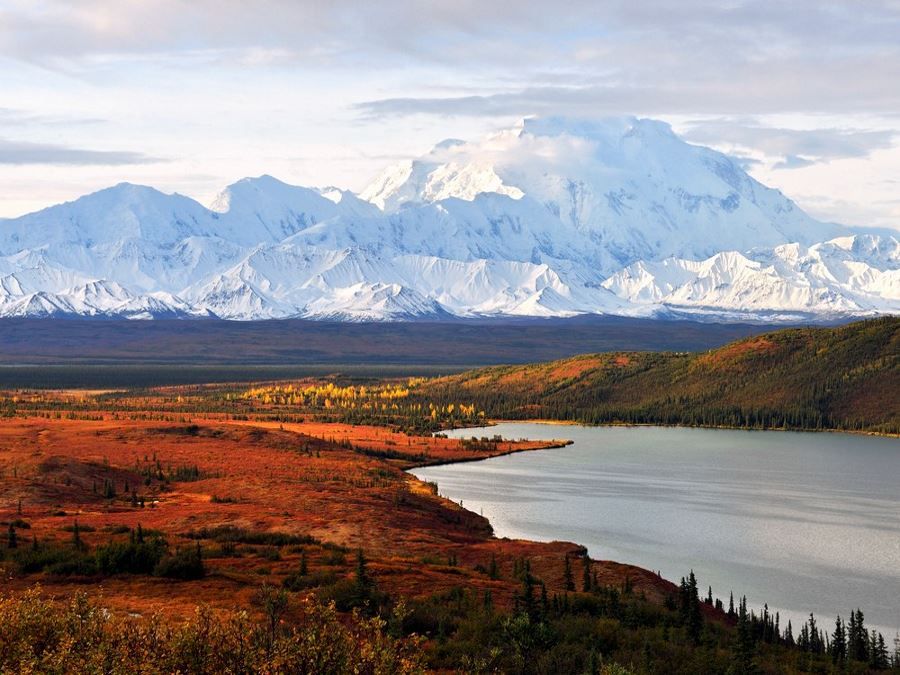 The Kesugi Ridge trail offers days of stunning panoramas of the Alaska Mountains including Denali (also known as Mount McKinley), America’s tallest mountain. The hike can be accessed at several points with the longest route roughly 36.0 mi. It is important to research your route because some access points may be closed due to flooding or an excessive number of bears. Which brings up another point, bear spray is a must. Because this trail is in Alaska, timing is important. This a trail best hiked during the summer and fall - late August and September are considered fall. The trail itself is easy to follow, although fog can be an issue so a compass is recommended. In good weather the views are unobstructed for days. 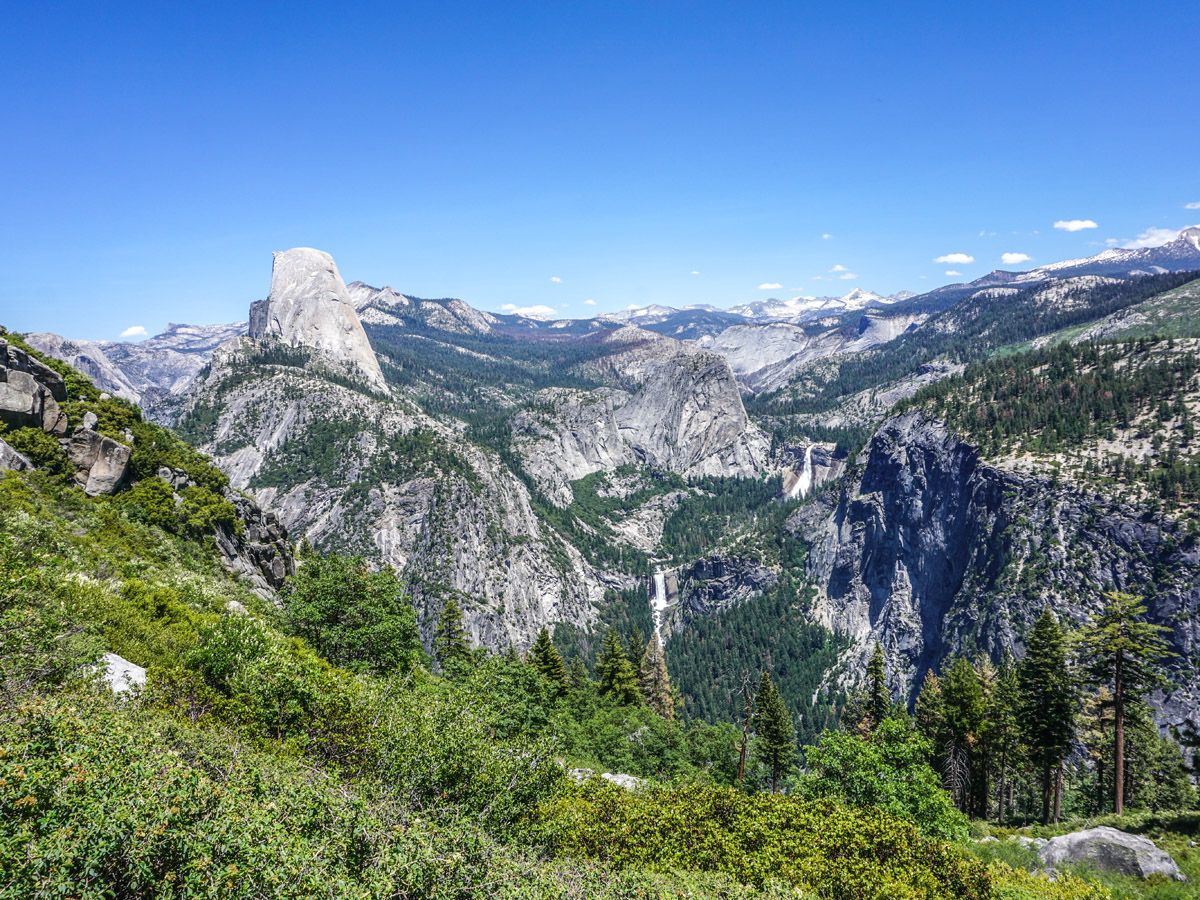 Hike the Panorama trail to see the best of Yosemite Valley

If you don’t want to do the whole thing, check out 10Adventures Yosemite region 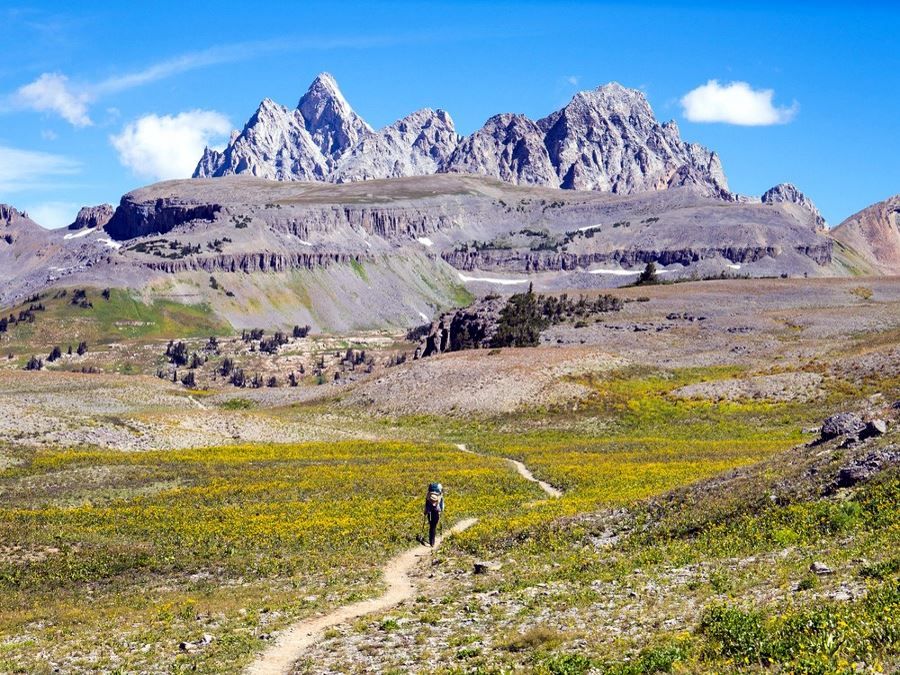 10Adventures covers the best hikes in the Tetons as well.

MAINE: Part of the Appalachian Trail 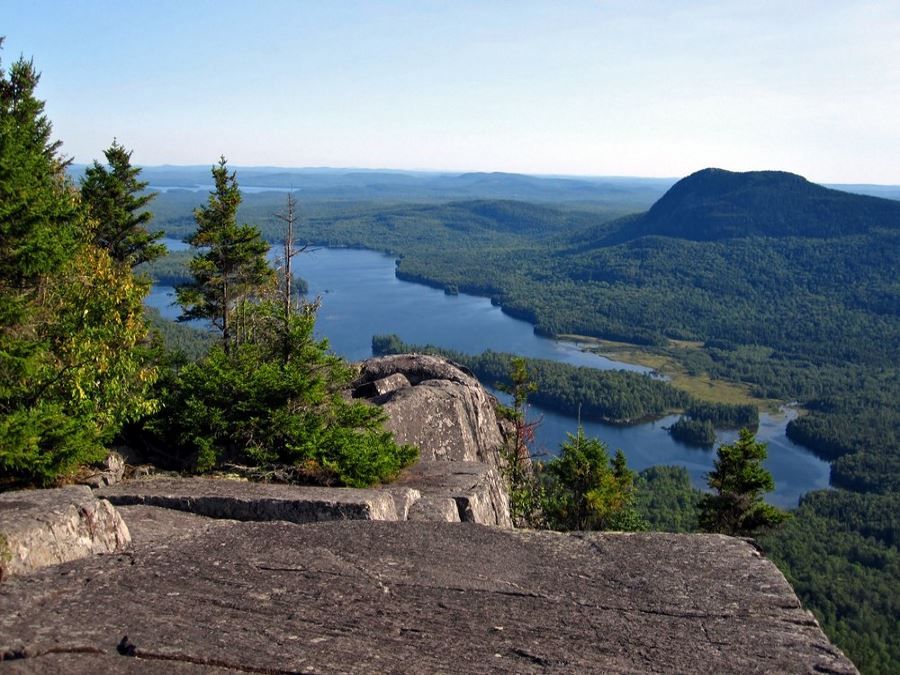 Maine’s 100.0 mi Wilderness is the longest part of the Appalachian Trail that never crosses a paved road. It begins at Monson, Maine, and ends at the northern terminus of the trail at Katahdin Mountain in Baxter State Park. Famous for its isolation, the 100.0 mi Wilderness can also be dangerous for non-expert hikers and a downright grind in spots. For those looking for a less arduous adventure, the first 30.0 mi offers a great hike through rugged but beautiful terrain with 70 percent fewer miles. Highlights include Lower Wilson Falls, the biggest waterfall on the Appalachian Trail, clear running streams and plenty of panoramic vistas from rocky mountaintops. Most people finish this hike in three days. 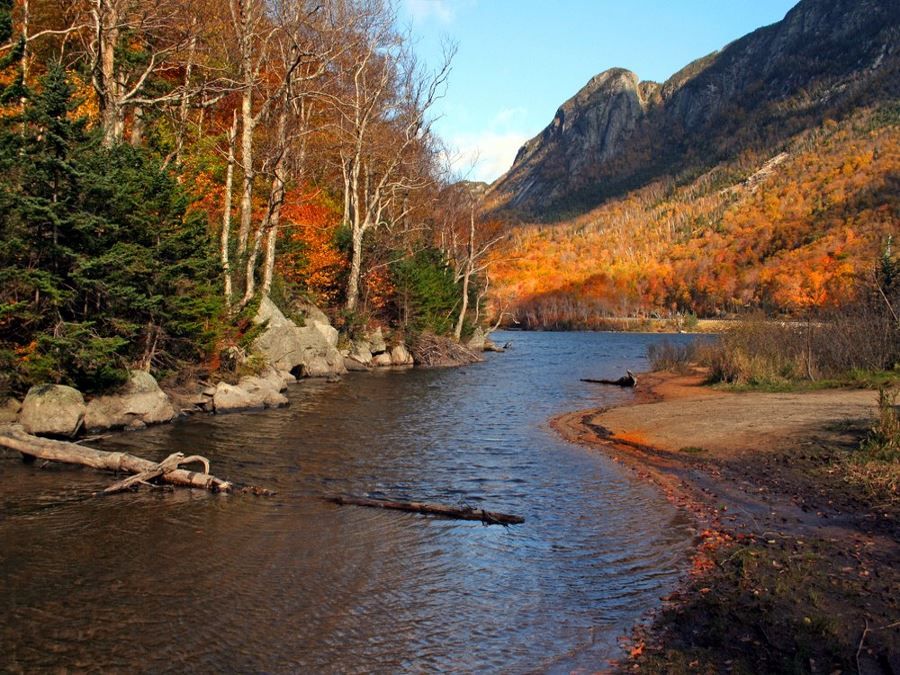 The Pemi Loop is 31.5 mi of intense hiking – more than 9,000 ft in elevation gain – with eight 4,000 ft-plus peaks encircling the western half of New Hampshire’s Pemigewasset Wilderness. Featuring rugged terrain and spectacular vistas, this trip is best done in two or three days. Each of the peaks offers panoramic vistas and four additional 4,000 ft summits can be reached via short day hikes. While the rewards are high, the demands are also, so only embark on this trail if you are sure your knees are up to it. Because significant sections are exposed, it is also important be prepared for the White Mountain’s notoriously variable weather conditions. Bears are also found in the Pemigewasset Wilderness, so carrying bear spray is a very good idea. 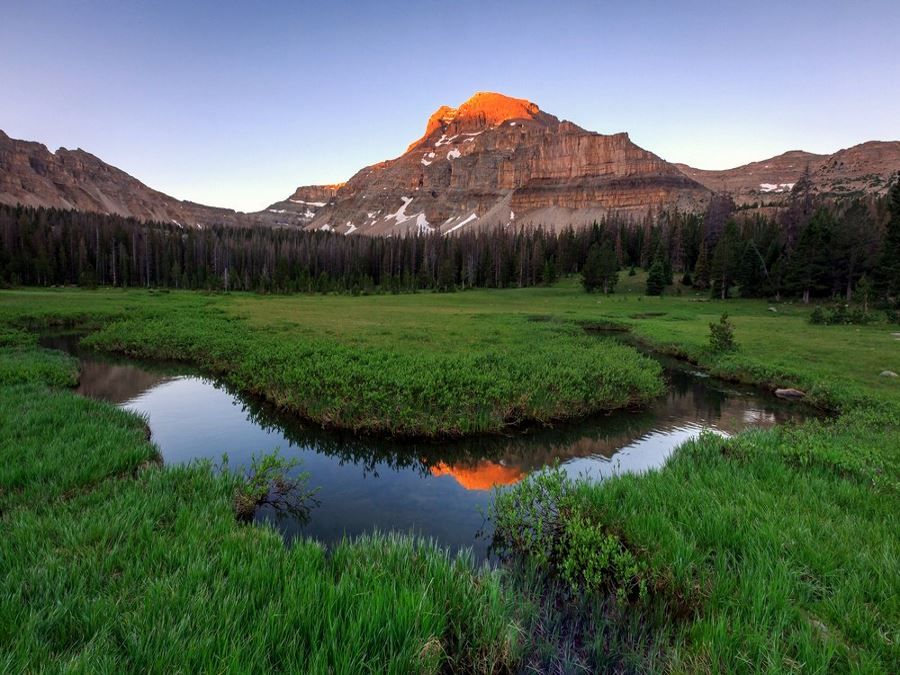 If you are looking for a trail less traveled, the Highline Trail through Utah’s Uinta Mountains is worth your consideration. Roughly 75.0 mi through challenging terrain, most of which is around 11,000 ft in elevation with the highest point about 12,600 ft, this trail can be difficult and above all remote, so make sure you are well prepared for a wilderness experience largely above the tree line. That said, the Highline Trail is justifiably revered by hikers and if you enjoy having long stretches of trail to yourself, serene lakes, gorgeous views of high mountains, pine forests and lots of wildlife, put this trail on your list.

Check out our favourite day hikes in the Uintas. Encircling Mount Rainier, the Wonderland Trail is about 93.0 mi long and is considered a strenuous trail with more than 22,000 ft of cumulative elevation gain. Most people complete the trail in 10 to 14 days. With almost every section of the trail ascending or descending, the environment and even the micro-climate is constantly changing. Hikers will see glaciers, cascading waterfalls, subalpine meadows, lakes, canyons and stands of temperate rain forests. There are several river crossings, including two suspension bridges and some primitive log bridges. During the most popular hiking season in late summer, the weather is more likely to be dry and sunny but during the spring, as well as the first half or so of summer, rain, snow and swollen rivers can create hazards. Camping is allowed in designated camps only and permits are required.

If you'd like to experience a beautiful and challenging day hike in Washington, check out the Yellow Aster Butte trail in Mount Baker area. The Four Pass Loop through the Maroon Bells Mountains offers world class scenery including rugged mountain peaks, beautiful wildflowers in alpine meadows and pristine mountain lakes. Normally this loop takes three or four days and hikers will be challenged by four mountain passes, each over 12,000 ft and the highest – West Maroon Pass – 12,500 ft. Because of the elevation, it is probably best to plan your trip for late summer or early fall. Earlier in the season, snow melt creates swift running rivers. Overnight hikers are also required to use approved bear food storage containers. Free permits must be obtained at the trailhead.

Check out our favourite day hikes around Aspen. 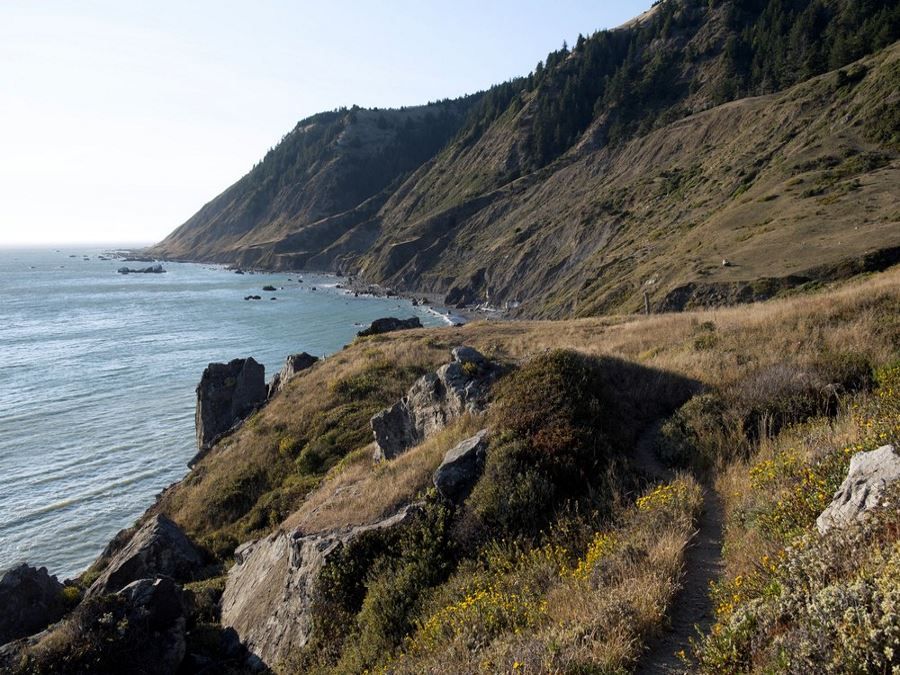 Named for its tendency to vanish at high tide, and the scarcity of roads in the area, the northern section of the Lost Coast Trail passes through a slice of California’s coast so rugged that it literally drove the Pacific Coast Highway inland. Here, the mountains of the King Range meet the ocean and the trail winds through hidden beaches and up rugged highlands to soaring vistas above the Pacific Ocean. The scenery is stunning, but because much of the trail is beach, which literally disappears twice a day, it is important to study the tides and plan accordingly. Bear spray is also required and because the rainfall amounts can reach more than 3 m a year, it is best to plan for a deluge, although precipitation in July and August is much less than during the winter months. 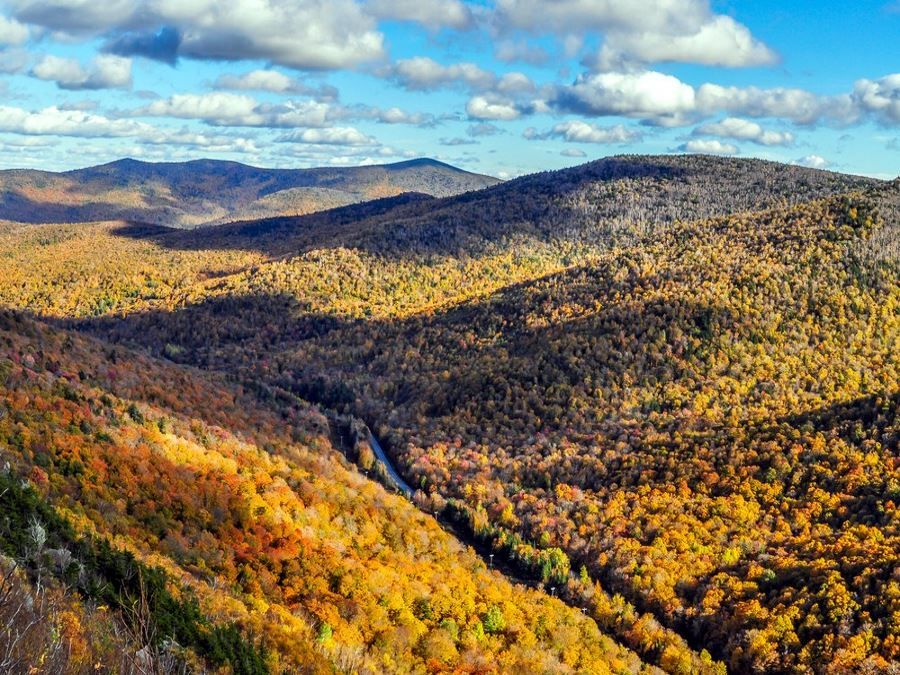 Stretching 270.0 mi from the Massachusetts border to Canada, the Long Trail, which travels along the spine of Vermont’s Green Mountains is this country’s oldest long-distance hiking path, conceived in 1909 and finally completed in 1930. Offering more backcountry than wilderness, the trail climbs rugged peaks and passes pristine woodland ponds, hardwood forests, alpine sedge and swift-flowing streams. In addition to the central footpath, there are 185.0 mi of side trails and roughly 70 backcountry campsites. A thru hike will take 20 to 30 days, but there is plenty of opportunity for section hiking. As with any hike involving exposed terrain, take appropriate precautions during inclement weather, and also be aware that this trail can be muddy in sections and bring plenty of extra socks.

Did you like this article? Check out our 10 Best Day Hikes in the US or the best long-distance hikes in the US.