Bear Safety On A Backpacking Trip

By Emma SchroederApril 19th, 2018Adventure Health
Previous BlogHow to Prevent and Treat Muscle Soreness and BlistersNext Blog 10 Tips for Having fun and Staying Safe on the Winter Trails

Imagine this: You’re happily meandering the trail when a bear crosses the path metres ahead. Your heart drops, and your body freezes in place. Seeing a bear so close is beyond frightening! What do you do next? How can we prevent this encounter in the first place?

What should you do if you see a bear while driving?

While there are a lot of scary bear stories out there, you are more likely to encounter a bear driving to the trailhead than you are on the trail.

If you do happen to see a bear while driving, stay in your vehicle. Take a few pictures and move on. The more bears become accustomed to vehicles, the more time they’ll spend around them, often leading to vehicle-bear collisions.

Be aware of the impact of bear jams – traffic jams caused by dozens of people stopping to look at a bear. These cause stress to the bears, often provoking aggressive reactions (much like you would if 30 people were crowded around you while you were just trying to eat dinner and catch up on Suits). Never, EVER feed a bear – a fed bear is a dead bear, and it also carries a maximum $25,000 fine.

Bears are generally not aggressive animals, and not interested in encountering (or eating) humans. In fact, both black & grizzly bears diets in the Rockies are around 80 – 90% vegetation. Bears tend to only display aggression in three situations:

By being “bear aware” and avoiding these situations, you can avoid a negative human-bear encounter. Below are our five steps to help you be bear aware and reduce the chance of a bear encounter when out hiking.

Steps to help you be bear aware

Watch out for signs of bear activity or habitat

How can you tell if there are bears in the area? One sure-fire sign is scat, more commonly known as bear poop.

A bear’s waste is typically large, solid and black, but may be red & runny during berry season. Grizzly bears like to dig for roots, tubers and ground squirrels, particularly in alpine and subalpine meadows. Look for large sections of disturbed earth.

In July & August, buffalo berries ripen, the favourite food of Mr. Bear. Be extra wary in patches of these shrubby, bright red berries.

If you find an animal carcass cached, that’s an absolute indication a bear is in the area. Leave quickly.

Finally – if you see a bear cub, assume mama is not far away. Keep your eyes open and get away from the situation.

Ultimately, do not give a bear a reason to defend its food or cubs. 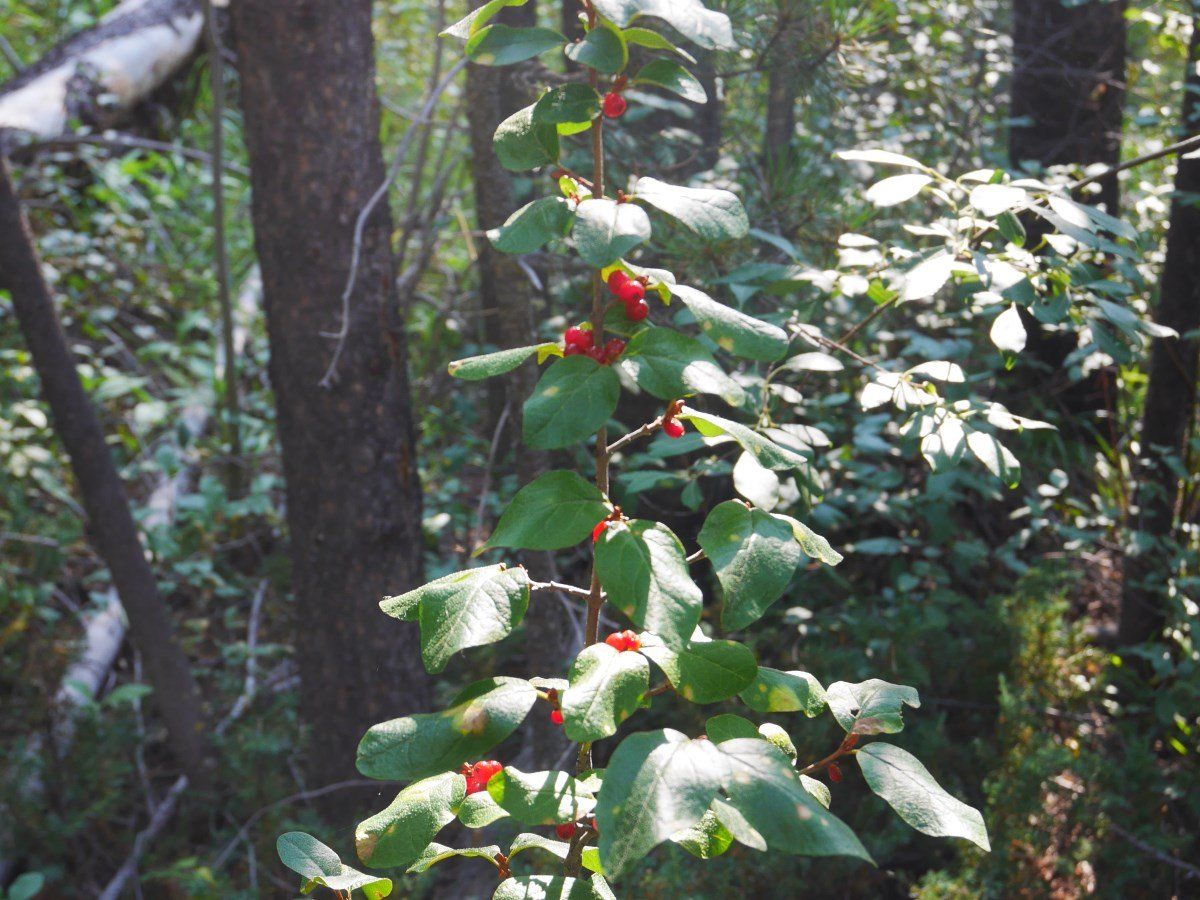 Make yourself known to the bears

Bears have much greater hearing and a much better sense of smell than us. If a bear detects you’re in the area, it will most likely leave that area.

The best way to let a bear know you’re around is to hike in groups of four or more and keep all dogs on leash – off leash dogs can be attractants for bears. Some trails in the Canadian Rockies will have a “Group Access Restriction”, which means you can only hike in groups of 4 or more for this very reason.

Think of this, there has never been a recorded bear attack on a group of four or more people. The natural noise of a group of humans together is often enough to deter a bear from approaching. Make noise on the trail – sing, clap, or give a loud “HEY BEAR” every few minutes. Make it fun – some of my friends' bear calls include a chicken squawk, an Australian style cooee, or their impression of a siren. All this noise will prevent you “sneaking up” on a bear and startling it. When startled, a bear may react defensively as it doesn’t know if there is a threat or not.

In noisy areas, like beside rushing rivers, or coming up to blind corners, take extra care and make extra noise. Trail running, mountain biking or anything that makes you move fast and quietly through the woods increases your chances of sneaking up on a bear, so be extra aware.

Most importantly, bear bells do not work. The noise they make is simply not loud enough to be effective. The next time a friend shows up to a hike with bear bells, have them walk 30 meters away from you and ring the bells.

Bears are naturally curious animals and are thought to have the best sense of smell of any land animal. Grizzlies are able to sniff out a deer carcass up to 9 km away and underneath snow.

Bears are attracted to food smells, but also any item with a strong odour. The goal is to reduce odours that attract bears where humans are. You can help reduce orders by: 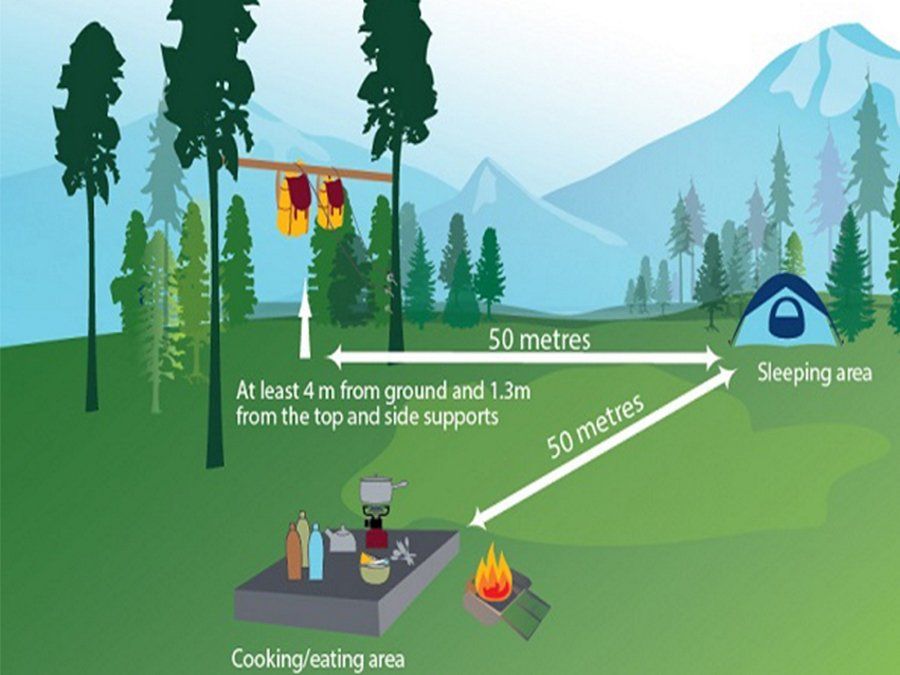 Carry bear spray and know how to use it

Bear spray is your best defense against an aggressive bear and has saved many hikers from injuries.

Bear spray is simply a concentrated, larger version of pepper spray. It should be carried anytime you’re out in the woods – and many locals who live in Banff or Canmore carry it walking their dogs on the outskirts of town.

Critically, the canister must be easily accessible – clip it to your backpack strap, wear it in a holster on your belt, or carry it in a reachable side pocket of your backpack.

Something most people forget is to consider wind direction when using bear spray. Try and get the bear down-wind of you when spraying. If there’s a strong wind in your face, not only will you not get a bear 10m away, you’ll also end up pepper spraying yourself, a sub-optimal event with an aggressive bear nearby.

What to do in a bear encounter

If you do encounter a bear and it hasn’t noticed you, simply go back the way you came, keeping an eye on the bear's movements. If you must proceed, take a wide berth around it, this may mean going off trail. In some cases, such as a mountain path with no detour, it may mean you retrace your steps and you won’t be able to finish your hike.

If the bear has noticed you, it will likely be trying to work out if you’re a threat or not. Talk calmly and firmly to it, letting it know you’re human, not food. Take out your bear spray and group together. Pick up children.

Watch the bear’s behaviour. Standing on its hind legs means the bear is scenting you – not an aggressive move. Woofing, teeth clacking or stamping its paws means the bear is agitated by your presence. Continue talking calmly to the bear, and back away.

Threatened bears may perform a “bluff charge,” running suddenly towards you and coming up short – a defensive move meant to scare you. Stand your ground and make yourself look big. If the bear stops, slowly move away. If the bear continues to approach, shout, make yourself big, wave your pole or a stick.

If the bear still persists in aggressive behaviour, use your bear spray. Aim for the face and spray in short, 2 second bursts. The spray will hurt the bear's eyes and respiratory tract, stopping the approach and giving you time to leave the area. Used correctly, bear spray is effective in 92 – 98% of bear encounters. Parks Canada has an excellent instructional video here. 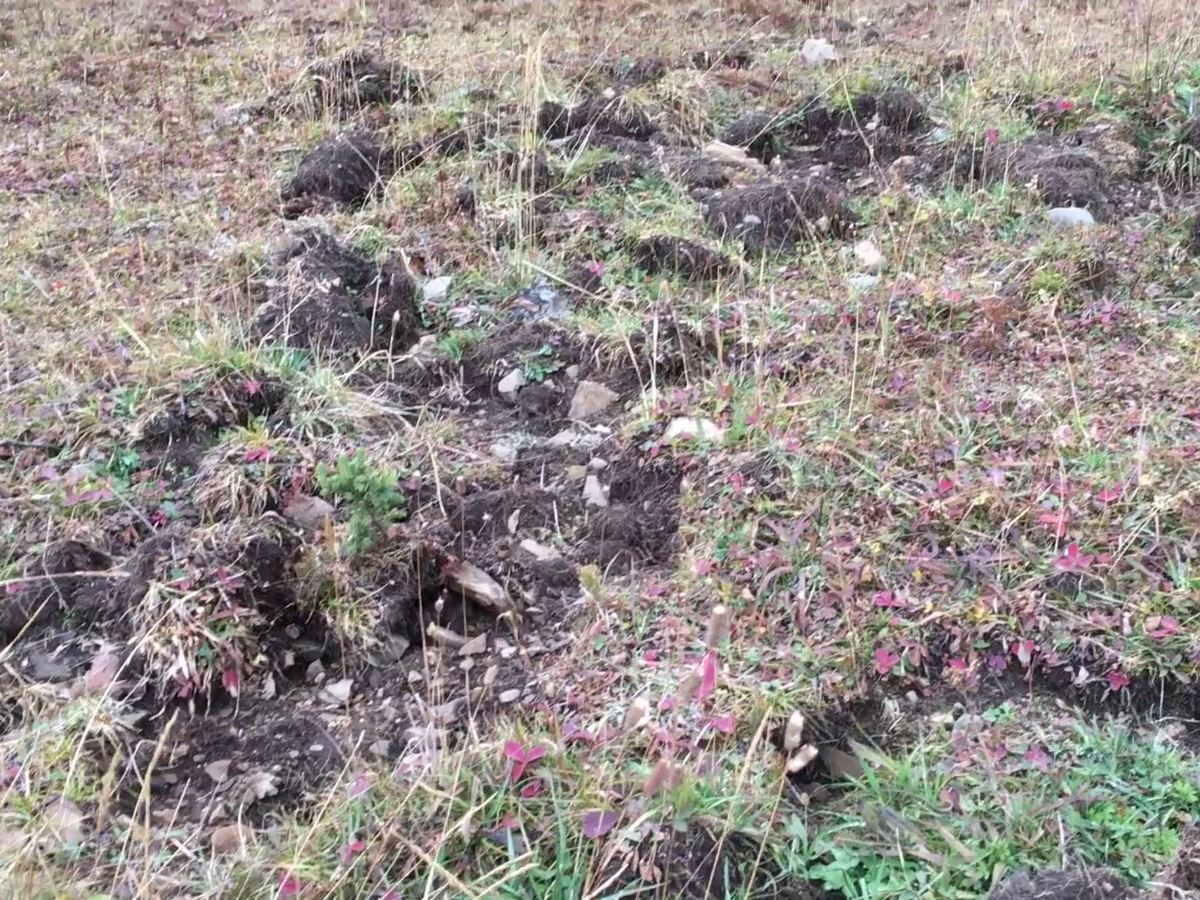 Bear digging along the hiking trail

What to do if bear attacks

If the bear attacks, it is most likely a defensive attack.

In a defensive attack, the bear would have displayed many of the defensive behaviours mentioned in Step 5. What should you do? Play dead. Keep your backpack on, lie on your stomach with your hands behind your neck and your legs apart, to make it harder for the bear to roll you over. Lie still. Most likely the bear will see that you’re no longer a threat and leave. Most defensive attacks last less than two minutes. Stay in this position until you’re sure the bear has left the area.

There are rare cases where a hungry bear stalks a human in a predatory manner. Predatory attacks are typically against a lone human, often in spring or late-autumn, when a hungry bear needs food. If the attack is predatory, the bear will be intent on you, stalking you, and not displaying any of the agitated behaviours.

Try to escape to a building, vehicle or up a tree – but you need to be able to climb high. Black bears climb very well, and grizzlies can reach 10 feet up trees. If you can’t escape, fight back, hard. Use your bear spray, fists, rocks (anecdotally bears don’t like rocks thrown at them) and anything at hand. Make it known you won’t be easy prey. This type of attack is incredibly rare.

Ultimately, it is much more common for a bear to be killed by humans, than for a human to be killed by a bear. As a good outdoor user, practice bear safety, educate others, and help keep the bears wild and free.

You can find more details on what to do if you encounter a bear on a trail and how to prevent these situations by checking out Parks Canada’s guide to bear safety for expert tips here.

Lastly, if you’re quite scared of bears or are new to roaming the backcountry, we suggest checking out Bear Attacks: Their Causes and Avoidance, a book that details what to do when a bear attacks and how to stay safe. It’s meant to ease your worries as you tackle hikes and backpacking trips, though bear in mind (pun intended), that the book is very explicit and some readers might find it a bit shocking.

Seeking more backcountry tips? Our backpacking 101 article provides a lot of detail on how to prepare for your first trip.